Structural Basis of Pan-Ebolavirus Neutralization by a Human Antibody against a Conserved, yet Cryptic Epitope 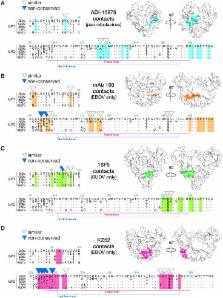 There are five different members of the Ebolavirus genus. Provision of vaccines and treatments able to protect against any of the five ebolaviruses is an important goal of public health. Antibodies are a desired result of vaccines and can be delivered directly as therapeutics. Most antibodies, however, are effective against only one or two, not all, of these pathogens. Only one human antibody has been thus far described to neutralize all five ebolaviruses, antibody ADI-15878. Here we describe the molecular structure of ADI-15878 bound to the relevant target proteins of Ebola virus and Bundibugyo virus. We explain how it achieves its rare breadth of activity and propose strategies to design improved vaccines capable of eliciting more antibodies like ADI-15878.

Only one naturally occurring human antibody has been described thus far that is capable of potently neutralizing all five ebolaviruses. Here we present two crystal structures of this rare, pan-ebolavirus neutralizing human antibody in complex with Ebola virus and Bundibugyo virus glycoproteins (GPs), respectively. The structures delineate the key protein and glycan contacts for binding that are conserved across the ebolaviruses, explain the antibody’s unique broad specificity and neutralization activity, and reveal the likely mechanism behind a known escape mutation in the fusion loop region of GP2. We found that the epitope of this antibody, ADI-15878, extends along the hydrophobic paddle of the fusion loop and then dips down into a highly conserved pocket beneath the N-terminal tail of GP2, a mode of recognition unlike any other antibody elicited against Ebola virus, and likely critical for its broad activity. The fold of Bundibugyo virus glycoprotein, not previously visualized, is similar to the fold of Ebola virus GP, and ADI-15878 binds to each virus’s GP with a similar strategy and angle of attack. These findings will be useful in deployment of this antibody as a broad-spectrum therapeutic and in the design of immunogens that elicit the desired broadly neutralizing immune response against all members of the ebolavirus genus and filovirus family.

Role of endosomal cathepsins in entry mediated by the Ebola virus glycoprotein.

Sue E. Delos,  Kathryn Schornberg,  Amy Bouton … (2006)
Using chemical inhibitors and small interfering RNA (siRNA), we have confirmed roles for cathepsin B (CatB) and cathepsin L (CatL) in Ebola virus glycoprotein (GP)-mediated infection. Treatment of Ebola virus GP pseudovirions with CatB and CatL converts GP1 from a 130-kDa to a 19-kDa species. Virus with 19-kDa GP1 displays significantly enhanced infection and is largely resistant to the effects of the CatB inhibitor and siRNA, but it still requires a low-pH-dependent endosomal/lysosomal function. These and other results support a model in which CatB and CatL prime GP by generating a 19-kDa intermediate that can be acted upon by an as yet unidentified endosomal/lysosomal enzyme to trigger fusion.

Discovery of swine as a host for the Reston ebolavirus.

Christian Mayr,  Stuart T. Nichol,  Thomas G Ksiazek … (2009)
Since the discovery of the Marburg and Ebola species of filovirus, seemingly random, sporadic fatal outbreaks of disease in humans and nonhuman primates have given impetus to identification of host tropisms and potential reservoirs. Domestic swine in the Philippines, experiencing unusually severe outbreaks of porcine reproductive and respiratory disease syndrome, have now been discovered to host Reston ebolavirus (REBOV). Although REBOV is the only member of Filoviridae that has not been associated with disease in humans, its emergence in the human food chain is of concern. REBOV isolates were found to be more divergent from each other than from the original virus isolated in 1989, indicating polyphyletic origins and that REBOV has been circulating since, and possibly before, the initial discovery of REBOV in monkeys.

Raymond A. Dwek,  Hermann Katinger,  Robyn L. Stanfield … (2002)
2G12 is a broadly neutralizing human monoclonal antibody against human immunodeficiency virus type-1 (HIV-1) that has previously been shown to bind to a carbohydrate-dependent epitope on gp120. Here, site-directed mutagenesis and carbohydrate analysis were used to define further the 2G12 epitope. Extensive alanine scanning mutagenesis showed that elimination of the N-linked carbohydrate attachment sequences associated with residues N295, N332, N339, N386, and N392 by N-->A substitution produced significant decreases in 2G12 binding affinity to gp120(JR-CSF). Further mutagenesis suggested that the glycans at N339 and N386 were not critical for 2G12 binding to gp120(JR-CSF). Comparison of the sequences of isolates neutralized by 2G12 was also consistent with a lesser role for glycans attached at these positions. The mutagenesis studies provided no convincing evidence for the involvement of gp120 amino acid side chains in 2G12 binding. Antibody binding was inhibited when gp120 was treated with Aspergillus saitoi mannosidase, Jack Bean mannosidase, or endoglycosidase H, indicating that Man(alpha)1-->2Man-linked sugars of oligomannose glycans on gp120 are required for 2G12 binding. Consistent with this finding, the binding of 2G12 to gp120 could be inhibited by monomeric mannose but not by galactose, glucose, or N-acetylglucosamine. The inability of 2G12 to bind to gp120 produced in the presence of the glucose analogue N-butyl-deoxynojirimycin similarly implicated Man(alpha)1-->2Man-linked sugars in 2G12 binding. Competition experiments between 2G12 and the lectin cyanovirin for binding to gp120 showed that 2G12 only interacts with a subset of available Man(alpha)1-->2Man-linked sugars. Consideration of all the data, together with inspection of a molecular model of gp120, suggests that the most likely epitope for 2G12 is formed from mannose residues contributed by the glycans attached to N295 and N332, with the other glycans playing an indirect role in maintaining epitope conformation.

This is manuscript 29730 from Scripps Research.