Serotonin receptor agonists in the acute treatment of migraine: a review on their therapeutic potential 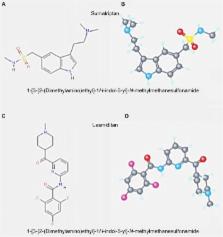 Migraine is an important socioeconomic burden and is ranked the sixth cause of years of life lost because of disability in the general population and the third cause of years of life lost in people younger than 50 years. The cornerstone of pharmacological treatment is represented by the acute therapy. The serotonin (5-hydroxytryptamine [5-HT]) receptor subtype 1 B/1 D agonists, called triptans, are nowadays the first-line acute therapy for patients who experience moderate-to-severe migraine attacks. Unfortunately, a high percentage of patients are not satisfied with this acute treatment, either for lack of response or side effects. Moreover, their mechanism of action based on vasoconstriction makes them unsuitable for patients with previous cardio- and cerebrovascular diseases and for those with uncontrolled hypertension. Since the introduction of triptans, no other acute drug class has passed all developmental stages. The research for a new drug lacking vasoconstrictive effects led to the development of lasmiditan, a highly selective 5-HT1 F receptor agonist with minimized interactions with other 5-HT receptor subtypes. Lasmiditan is considered to be the first member of a new drug category, the neurally acting anti-migraine agent (NAAMA). Phase II and III trials had shown superiority compared to placebo and absence of typical triptan-associated adverse events (AEs). Most of the AEs were related to the central nervous system, depending on the high permeability through the blood–brain barrier and mild to moderate severity. The results of ongoing long-term Phase III trials will determine whether lasmiditan will become available in the market, and then active triptan comparator studies will assess patients’ preference. Future studies could then explore the safety during pregnancy and breastfeeding or the risk that overuse of lasmiditan leads to medication overuse headache.

Michael A. Moskowitz,  Daniela Pietrobon (2012)
Migraine is a collection of perplexing neurological conditions in which the brain and its associated tissues have been implicated as major players during an attack. Once considered exclusively a disorder of blood vessels, compelling evidence has led to the realization that migraine represents a highly choreographed interaction between major inputs from both the peripheral and central nervous systems, with the trigeminovascular system and the cerebral cortex among the main players. Advances in in vivo and in vitro technologies have informed us about the significance to migraine of events such as cortical spreading depression and activation of the trigeminovascular system and its constituent neuropeptides, as well as about the importance of neuronal and glial ion channels and transporters that contribute to the putative cortical excitatory/inhibitory imbalance that renders migraineurs susceptible to an attack. This review focuses on emerging concepts that drive the science of migraine in both a mechanistic direction and a therapeutic direction.

Cost of healthcare for patients with migraine in five European countries: results from the International Burden of Migraine Study (IBMS)

L. M. Bloudek,  M. Stokes,  D. C. Buse … (2012)
Migraine is a disabling neurological disease that affects 14.7 % of Europeans. Studies evaluating the economic impact of migraine are complex to conduct adequately and with time become outdated as healthcare systems evolve. This study sought to quantify and compare direct medical costs of chronic migraine (CM) and episodic migraine (EM) in five European countries. Cross-sectional data collected via a web-based survey were screened for migraine and classified as CM (≥15 headache days/month) or EM (<15 headache days/month), and included sociodemographics, resource use data and medication use. Unit cost data, gathered using publicly available sources, were analyzed for each type of service, stratified by migraine status. Univariate and multivariate log-normal regression models were used to examine the relationship between various factors and their impact on total healthcare costs. This economic analysis included data from respondents with migraine in the UK, France, Germany, Italy, and Spain. CM participants had higher level of disability and more prevalent psychiatric disorders compared to EM. CM participants had more provider visits, emergency department/hospital visits, and diagnostic tests; the medical costs were three times higher for CM than EM. Per patient annual costs were highest in the UK and Spain and lower in France and Germany. CM was associated with higher medical resource use and total costs compared to EM in all study countries, suggesting that treatments that reduce headache frequency could decrease the clinical and economic burden of migraine in Europe. Comparing patterns of care and outcomes among countries may facilitate the development of more cost-effective care, and bring greater recognition to patients affected by migraine.

Headache disorders are third cause of disability worldwide