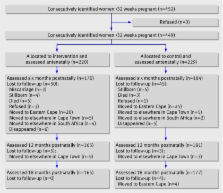 Objective To assess the efficacy of an intervention designed to improve the mother-infant relationship and security of infant attachment in a South African peri-urban settlement with marked adverse socioeconomic circumstances.

Interventions The intervention was delivered from late pregnancy and for six months postpartum. Women were visited in their homes by previously untrained lay community workers who provided support and guidance in parenting. The purpose of the intervention was to promote sensitive and responsive parenting and secure infant attachment to the mother. Women in the control group received no therapeutic input from the research team.

Conclusions The intervention, delivered by local lay women, had a significant positive impact on the quality of the mother-infant relationship and on security of infant attachment, factors known to predict favourable child development. If these effects persist, and if they are replicated, this intervention holds considerable promise for use in the developing world.

David Sanders,  S. Jan,  Joy E. Lawn … (2007)
There is renewed interest in the potential contribution of community health workers to child survival. Community health workers can undertake various tasks, including case management of childhood illnesses (eg, pneumonia, malaria, and neonatal sepsis) and delivery of preventive interventions such as immunisation, promotion of healthy behaviour, and mobilisation of communities. Several trials show substantial reductions in child mortality, particularly through case management of ill children by these types of community interventions. However, community health workers are not a panacea for weak health systems and will need focussed tasks, adequate remuneration, training, supervision, and the active involvement of the communities in which they work. The introduction of large-scale programmes for community health workers requires evaluation to document the impact on child survival and cost effectiveness and to elucidate factors associated with success and sustainability.

The impact of postnatal depression and associated adversity on early mother-infant interactions and later infant outcome.

L. Murray,  Stephen R Hooper,  Marcus P. Cooper … (1996)
The impact of maternal depression and adversity on mother-infant face-to-face interactions at 2 months, and on subsequent infant cognitive development and attachment, was examined in a low-risk sample of primiparous women and their infants. The severe disturbances in mother-infant engagement characteristic of depressed groups in disadvantaged populations were not evident in the context of postpartum mood disorder in the present study. However, compared to well women, depressed mothers were less sensitively attuned to their infants, and were less affirming and more negating of infant experience. Similar difficulties in maternal interactions were also evident in the context of social and personal adversity. Disturbances in early mother-infant interactions were found to be predictive of poorer infant cognitive outcome at 18 months. Infant attachment, by contrast, was not related to the quality of 2-month interactions, but was significantly associated with the occurrence of adversity, as well as postpartum depression.

Gender, poverty, and postnatal depression: a study of mothers in Goa, India.

Vikram Patel,  Nandita deSouza,  Ana S. M. C. Rodrigues (2001)
This study described the natural history of depression in mothers who recently gave birth in a low-income country and to investigate the effect of risk factors, particularly related to infant gender bias, on the occurrence and outcome of depression. The authors studied a group of pregnant mothers recruited during their third trimester of pregnancy from a district hospital in Goa, India. The mothers were interviewed at recruitment, 6-8 weeks, and 6 months after childbirth. Interview data included presence of antenatal and postnatal depression, obstetric history, economic and demographic characteristics, and gender-based variables (preference for male infant, presence of marital violence). Depressive disorder was detected in 59 (23%) of the mothers at 6-8 weeks after childbirth; 78% of these patients had had clinically substantial psychological morbidity during the antenatal period. More than one-half of the patients remained ill at 6 months after delivery. Economic deprivation and poor marital relationships were important risk factors for the occurrence and chronicity of depression. The gender of the infant was a determinant of postnatal depression; it modified the effect of other risk factors, such as marital violence and hunger. Depressed mothers were more disabled and were more likely to use health services than nondepressed mothers. Maternal and infant health policies, a priority in low-income countries, must integrate maternal depression as a disorder of public health significance. Interventions should target mothers in the antenatal period and incorporate a strong gender-based component.