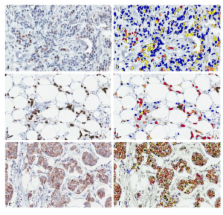 Molecular studies of breast cancer revealed biological heterogeneity of the disease and opened new perspectives for personalized therapy. While multiple gene expression-based systems have been developed, current clinical practice is largely based upon conventional clinical and pathologic criteria. This gap may be filled by development of combined multi-IHC indices to characterize biological and clinical behaviour of the tumours. Digital image analysis (DA) with multivariate statistics of the data opens new opportunities in this field.

Tissue microarrays of 109 patients with breast ductal carcinoma were stained for a set of 10 IHC markers (ER, PR, HER2, Ki67, AR, BCL2, HIF-1α, SATB1, p53, and p16). Aperio imaging platform with the Genie, Nuclear and Membrane algorithms were used for the DA. Factor analysis of the DA data was performed in the whole group and hormone receptor (HR) positive subgroup of the patients (n = 85).

Major factor potentially reflecting aggressive disease behaviour (i-Grade) was extracted, characterized by opposite loadings of ER/PR/AR/BCL2 and Ki67/HIF-1α. The i-Grade factor scores revealed bimodal distribution and were strongly associated with higher Nottingham histological grade (G) and more aggressive intrinsic subtypes. In HR-positive tumours, the aggressiveness of the tumour was best defined by positive Ki67 and negative ER loadings. High Ki67/ER factor scores were strongly associated with the higher G and Luminal B types, but also were detected in a set of G1 and Luminal A cases, potentially indicating high risk patients in these categories. Inverse relation between HER2 and PR expression was found in the HR-positive tumours pointing at differential information conveyed by the ER and PR expression. SATB1 along with HIF-1α reflected the second major factor of variation in our patients; in the HR-positive group they were inversely associated with the HR and BCL2 expression and represented the major factor of variation. Finally, we confirmed high expression levels of p16 in Triple-negative tumours.

Strategies for subtypes—dealing with the diversity of breast cancer: highlights of the St Gallen International Expert Consensus on the Primary Therapy of Early Breast Cancer 2011

A Goldhirsch,  W. C. Wood,  A S Coates … (2011)
The 12th St Gallen International Breast Cancer Conference (2011) Expert Panel adopted a new approach to the classification of patients for therapeutic purposes based on the recognition of intrinsic biological subtypes within the breast cancer spectrum. For practical purposes, these subtypes may be approximated using clinicopathological rather than gene expression array criteria. In general, systemic therapy recommendations follow the subtype classification. Thus, ‘Luminal A’ disease generally requires only endocrine therapy, which also forms part of the treatment of the ‘Luminal B’ subtype. Chemotherapy is considered indicated for most patients with ‘Luminal B', ‘Human Epidermal growth factor Receptor 2 (HER2) positive’, and ‘Triple negative (ductal)’ disease, with the addition of trastuzumab in ‘HER2 positive’ disease. Progress was also noted in defining better tolerated local therapies in selected cases without loss of efficacy, such as accelerated radiation therapy and the omission of axillary dissection under defined circumstances. Broad treatment recommendations are presented, recognizing that detailed treatment decisions need to consider disease extent, host factors, patient preferences, and social and economic constraints.

Ian Ellis,  Robert Elston (1991)
Morphological assessment of the degree of differentiation has been shown in numerous studies to provide useful prognostic information in breast cancer, but until recently histological grading has not been accepted as a routine procedure, mainly because of perceived problems with reproducibility and consistency. In the Nottingham/Tenovus Primary Breast Cancer Study the most commonly used method, described by Bloom & Richardson, has been modified in order to make the criteria more objective. The revised technique involves semiquantitative evaluation of three morphological features--the percentage of tubule formation, the degree of nuclear pleomorphism and an accurate mitotic count using a defined field area. A numerical scoring system is used and the overall grade is derived from a summation of individual scores for the three variables: three grades of differentiation are used. Since 1973, over 2200 patients with primary operable breast cancer have been entered into a study of multiple prognostic factors. Histological grade, assessed in 1831 patients, shows a very strong correlation with prognosis; patients with grade I tumours have a significantly better survival than those with grade II and III tumours (P less than 0.0001). These results demonstrate that this method for histological grading provides important prognostic information and, if the grading protocol is followed consistently, reproducible results can be obtained. Histological grade forms part of the multifactorial Nottingham prognostic index, together with tumour size and lymph node stage, which is used to stratify individual patients for appropriate therapy.

Norman Lee,  M Sayed,  Douglas R. Green … (2007)
Triple-negative breast cancer (estrogen receptor-negative, progesterone receptor-negative, and HER2-negative) is a high risk breast cancer that lacks the benefit of specific therapy that targets these proteins. In this study, the authors examined a large and well characterized series of invasive breast carcinoma (n = 1944) with a long-term clinical follow-up (median, 56 months) by using tissue microarray. The series were also stained with concurrent immunohistochemical prognostic panels (estrogen receptor, progesterone receptor, HER-2, androgen receptor, epidermal growth factor receptor (EGFR), P-cadherin, E-cadherin, and basal (CK5/6, CK14), and p53), to characterize this specific subgroup of breast cancer and to identify prognostic markers that can identify tumors with more aggressive behavior. Of informative cases, 16.3% were of the triple-negative phenotype. The majority of these tumors were grade 3, ductal/no-specific-type carcinomas. There were positive associations with larger size, pushing margins, poorer Nottingham Prognostic Index, development of recurrence and distant metastasis, and poorer outcome. In addition, associations were found with loss of expression of androgen receptor and E-cadherin, and positive expression of basal cytokeratins (basal phenotype), P-cadherin, p53, and EGFR. In all tumors, tumor size, lymph node stage, and androgen receptor were the most useful prognostic markers. In the lymph node-positive subgroup, both size and androgen receptor retained their prognostic significance. However, in the lymph node-negative tumors, basal phenotype was the sole prognostic marker identified in this subgroup. Other parameters including age, histological grade, tumor size, vascular invasion or other biomarkers included in the current study were not significant. The authors concluded that assessment of androgen receptor and basal phenotype, in addition to the established pathologic variables, mainly lymph node status and tumor size, can be used to select high-risk and low-risk patients at the time of primary surgery and can provide valuable information on treatment options in these triple-negative tumors. (c) 2006 American Cancer Society.