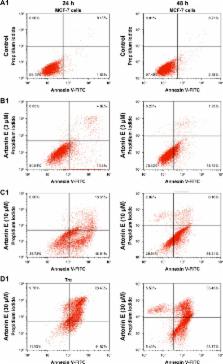 Artonin E is a prenylated flavonoid compound isolated from the stem bark of Artocarpus elasticus. This phytochemical has been previously reported to be drug-like with full compliance to Lipinski’s rule of five and good physicochemical properties when compared with 95% of orally available drugs. It has also been shown to possess unique medicinal properties that can be utilized in view of alleviating most human disease conditions. In this study, we investigated the cytotoxic mechanism of Artonin E in MCF-7 breast cancer cells, which has so far not been reported. In this context, Artonin E significantly suppressed the breast cancer cell’s viability while inducing apoptosis in a dose-dependent manner. This apoptosis induction was caspase dependent, and it is mediated mainly through the intrinsic pathway with the elevation of total reactive oxygen species. Gene and protein expression studies revealed significant upregulation of cytochrome c, Bax, caspases 7 and 9, and p21 in Artonin E-treated MCF-7 cells, while MAPK and cyclin D were downregulated. Livin, a member of the inhibitors of apoptosis, whose upregulation has been noted to precede chemotherapeutic resistance and apoptosis evasion was remarkably repressed. In all, Artonin E stood high as a potential agent in the treatment of breast cancer.

XUEJUN JIANG,  Xiaodong Wang (2003)
Apoptosis, or programmed cell death, is involved in development, elimination of damaged cells, and maintenance of cell homeostasis. Deregulation of apoptosis may cause diseases, such as cancers, immune diseases, and neurodegenerative disorders. Apoptosis is executed by a subfamily of cysteine proteases known as caspases. In mammalian cells, a major caspase activation pathway is the cytochrome c-initiated pathway. In this pathway, a variety of apoptotic stimuli cause cytochrome c release from mitochondria, which in turn induces a series of biochemical reactions that result in caspase activation and subsequent cell death. In this review, we focus on the recent progress in understanding the biochemical mechanisms and regulation of the pathway, the roles of the pathway in physiology and disease, and their potential therapeutic values.

Promoting apoptosis as a strategy for cancer drug discovery.

S W Fesik (2005)
Apoptosis is deregulated in many cancers, making it difficult to kill tumours. Drugs that restore the normal apoptotic pathways have the potential for effectively treating cancers that depend on aberrations of the apoptotic pathway to stay alive. Apoptosis targets that are currently being explored for cancer drug discovery include the tumour-necrosis factor (TNF)-related apoptosis-inducing ligand (TRAIL) receptors, the BCL2 family of anti-apoptotic proteins, inhibitor of apoptosis (IAP) proteins and MDM2.

Carole Nicco,  Yves Panis,  Christiane Chéreau … (2005)
Paradoxically, reactive oxygen species (ROS) can promote normal cellular proliferation and carcinogenesis, and can also induce apoptosis of tumor cells. In this report, we study the contribution of ROS to various cellular signals depending on the nature and the level of ROS produced. In nontransformed NIH 3T3 cells, ROS are at low levels and originate from NADPH oxidase. Hydrogen peroxide (H(2)O(2)), controlled by the glutathione system, is pivotal for the modulation of normal cell proliferation. In CT26 (colon) and Hepa 1-6 (liver) tumor cells, high levels of ROS, close to the threshold of cytotoxicity, are produced by mitochondria and H(2)O(2) is controlled by catalase. N-acetylcysteine, which decreases H(2)O(2) levels, inhibits mitogen-activated protein kinase and normal cell proliferation but increases tumor cell proliferation as H(2)O(2) concentration drops from the toxicity threshold. In contrast, antioxidant molecules, such as mimics of superoxide dismutase (SOD), increase H(2)O(2) levels through superoxide anion dismutation, as well as in vitro proliferation of normal cells, but kill tumor cells. CT26 tumors were implanted in mice and treated by oxaliplatin in association with one of the three SOD mimics manganese(III)tetrakis(4-benzoic acid) porphyrin, copper(II)(3,5-diisopropylsalicylate)2, or manganese dipyridoxyl diphosphate. After 1 month, the volumes of tumors were respectively 35%, 31%, and 63% smaller than with oxaliplatin alone (P < 0.001). Similar data were gained with Hepa 1-6 tumors. In conclusion, antioxidant molecules may have opposite effects on tumor growth. SOD mimics can act in synergy with cytotoxic drugs to treat colon and liver cancers.