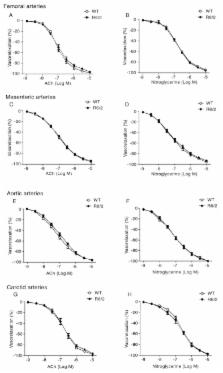 Whereas Huntington’s disease (HD) is unequivocally a neurological disorder, a critical mass of emerging studies highlights the occurrence of peripheral pathology like cardiovascular defects in both animal models and humans. The overt impairment in cardiac function is normally expected to be associated with peripheral vascular dysfunction, however whether this assumption is reasonable or not in HD is still unknown. In this study we functionally characterized the vascular system in R6/2 mouse model (line 160 CAG), which recapitulates several features of human pathology including cardiac disease. Vascular reactivity in different arterial districts was determined by wire myography in symptomatic R6/2 mice and age-matched wild type (WT) littermates. Disease stage was assessed by using well-validated behavioural tests like rotarod and horizontal ladder task. Surprisingly, no signs of vascular dysfunction were detectable in symptomatic mice and no link with motor phenotype was found.

Exon 1 of the HD gene with an expanded CAG repeat is sufficient to cause a progressive neurological phenotype in transgenic mice.

Laura Mangiarini,  Kirupa Sathasivam,  Mary Seller … (1996)
Huntington's disease (HD) is one of an increasing number of neurodegenerative disorders caused by a CAG/polyglutamine repeat expansion. Mice have been generated that are transgenic for the 5' end of the human HD gene carrying (CAG)115-(CAG)150 repeat expansions. In three lines, the transgene is ubiquitously expressed at both mRNA and protein level. Transgenic mice exhibit a progressive neurological phenotype that exhibits many of the features of HD, including choreiform-like movements, involuntary stereotypic movements, tremor, and epileptic seizures, as well as nonmovement disorder components. This transgenic model will greatly assist in an eventual understanding of the molecular pathology of HD and may open the way to the testing of intervention strategies.

Francis O Walker (2007)
Huntington's disease is an autosomal-dominant, progressive neurodegenerative disorder with a distinct phenotype, including chorea and dystonia, incoordination, cognitive decline, and behavioural difficulties. Typically, onset of symptoms is in middle-age after affected individuals have had children, but the disorder can manifest at any time between infancy and senescence. The mutant protein in Huntington's disease--huntingtin--results from an expanded CAG repeat leading to a polyglutamine strand of variable length at the N-terminus. Evidence suggests that this tail confers a toxic gain of function. The precise pathophysiological mechanisms of Huntington's disease are poorly understood, but research in transgenic animal models of the disorder is providing insight into causative factors and potential treatments.

L Lione,  John Carter,  A. Lione … (1999)
Transgenic mice expressing exon 1 of the human Huntington's disease (HD) gene carrying a 141-157 CAG repeat (line R6/2) develop a progressive neurological phenotype with motor symptoms resembling those seen in HD. We have characterized the motor deficits in R6/2 mice using a battery of behavioral tests selected to measure motor aspects of swimming, fore- and hindlimb coordination, balance, and sensorimotor gating [swimming tank, rotarod, raised beam, fore- and hindpaw footprinting, and acoustic startle/prepulse inhibition (PPI)]. Behavioral testing was performed on female hemizygotic R6/2 transgenic mice (n = 9) and female wild-type littermates (n = 22) between 5 and 14 weeks of age. Transgenic mice did not show an overt behavioral phenotype until around 8 weeks of age. However, as early as 5-6 weeks of age they had significant difficulty swimming, traversing the narrowest square (5 mm) raised beam, and maintaining balance on the rotarod at rotation speeds of 33-44 rpm. Furthermore, they showed significant impairment in prepulse inhibition (an impairment also seen in patients with HD). Between 8 and 15 weeks, R6/2 transgenic mice showed a progressive deterioration in performance on all of the motor tests. Thus R6/2 mice show measurable deficits in motor behavior that begin subtly and increase progressively until death. Our data support the use of R6/2 mice as a model of HD and indicate that they may be useful for evaluating therapeutic strategies for HD, particularly those aimed at reducing the severity of motor symptoms or slowing the course of the disease.