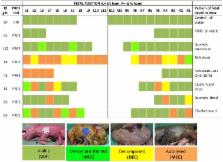 In spite of extensive research, the mechanisms of reproductive disease associated with Porcine Reproductive and Respiratory Syndrome virus (PRRSv) are still poorly understood. The objectives of this large scale study were to evaluate associations between viral load and fetal preservation, determine the impact of type 2 PRRSv on fetal weights, and investigate changes in ORF5 PRRSv genome in dams and fetuses during a 21-day period following challenge. At gestation day 85 (±1), 114 gilts were experimentally infected with type 2 PRRSv, while 19 gilts served as reference controls. At necropsy, fetuses were categorized according to their preservation status and tissue samples were collected. PRRSv RNA concentrations were measured in gilt serum collected on days 0, 2, 6, and 21 post-infection, as well as in gilt and fetal tissues collected at termination. Fetal mortality was 41±22.8% in PRRS infected litters. Dead fetuses appeared to cluster in some litters but appeared solitary or random in others. Nine percent of surviving piglets were meconium-stained. PRRSv RNA concentration in fetal thymus, fetal serum and endometrium differed significantly across preservation category and was greatest in tissues of meconium-stained fetuses. This, together with the virtual absence of meconium staining in non-infected litters indicates it is an early pathological condition of reproductive PRRS. Viral load in fetal thymus and in fetal serum was positively associated with viral load in endometrium, suggesting the virus exploits dynamic linkages between individual maternal-fetal compartments. Point mutations in ORF5 sequences from gilts and fetuses were randomly located in 20 positions in ORF5, but neither nucleotide nor amino acid substitutions were associated with fetal preservation. PRRSv infection decreased the weights of viable fetuses by approximately 17%. The considerable variation in gilt and fetal outcomes provides tremendous opportunity for more detailed investigations of potential mechanisms and single nucleotide polymorphisms associated with fetal death.

E Waide,  D Garrick,  N Boddicker … (2012)
Porcine reproductive and respiratory syndrome (PRRS) causes decreased reproductive performance in breeding animals and increased respiratory problems in growing animals, which result in significant economic losses in the swine industry. Vaccination has generally not been effective in the prevention of PRRS, partially because of the rapid mutation rate and evolution of the virus. The objective of the current study was to discover the genetic basis of host resistance or susceptibility to the PRRS virus through a genome-wide association study using data from the PRRS Host Genetics Consortium PRRS-CAP project. Three groups of approximately 190 commercial crossbred pigs from 1 breeding company were infected with PRRS virus between 18 and 28 d of age. Blood samples and BW were collected up to 42 d post infection (DPI). Pigs were genotyped with the Illumina Porcine 60k Beadchip. Whole-genome analysis focused on viremia at each day blood was collected and BW gains from 0 to 21 DPI (WG21) or 42 DPI (WG42). Viral load (VL) was quantified as area under the curve from 0 to 21 DPI. Heritabilities for WG42 and VL were moderate at 0.30 and litter accounted for an additional 14% of phenotypic variation. Genomic regions associated with VL were found on chromosomes 4 and X and on 1, 4, 7, and 17 for WG42. The 1-Mb region identified on chromosome 4 influenced both WG and VL, exhibited strong linkage disequilibrium, and explained 15.7% of the genetic variance for VL and 11.2% for WG42. Despite a genetic correlation of -0.46 between VL and WG42, genomic EBV for this region were favorably and nearly perfectly correlated. The favorable allele for the most significant SNP in this region had a frequency of 0.16 and estimated allele substitution effects were significant (P < 0.01) for each group when the SNP was fitted as a fixed covariate in a model that included random polygenic effects with overall estimates of -4.1 units for VL (phenotypic SD = 6.9) and 2.0 kg (phenotypic SD = 3 kg) for WG42. Candidate genes in this region on SSC4 include the interferon induced guanylate-binding protein gene family. In conclusion, host response to experimental PRRS virus challenge has a strong genetic component, and a QTL on chromosome 4 explains a substantial proportion of the genetic variance in the studied population. These results could have a major impact in the swine industry by enabling marker-assisted selection to reduce the impact of PRRS but need to be validated in additional populations.

F V Osorio,  Judith A Galeota,  A Doster … (2002)
Immune mechanisms mediating protective immunity against porcine reproductive and respiratory syndrome virus (PRRSV) are not well understood. The PRRSV-specific humoral immune response has been dismissed as being ineffective and perhaps deleterious for the host. The function of PRRSV antibodies in protective immunity against infection with a highly abortifacient strain of this virus was examined by passive transfer experiments in pregnant swine. All of a group of pregnant gilts (n = 6) that received PRRSV immunoglobulin (Ig) from PRRSV-convalescent, hyperimmune animals were fully protected from reproductive failure as judged by 95% viability of offspring at weaning (15 days of age). On the other hand, the totality of animals in a matched control group (n = 6) receiving anti-pseudorabies virus (PRV) Ig exhibited marked reproductive failure with 4% survival at weaning. Besides protecting the pregnant females from clinical reproductive disease, the passive transfer of PRRSV Ig prevented the challenge virus from infecting the dams and precluded its vertical transmission, as evidenced by the complete absence of infectious PRRSV from the tissues of the dams and lack of infection in their offspring. In summary, these results indicate that PRRSV-Igs are capable of conferring protective immunity against PRRSV and furthermore that these Igs can provide sterilizing immunity in vivo.

Funding for the project was generously provided by grants from Genome Canada, Genome Alberta and Genome Prairie (grant number 2209-F). The funders had no role in study design, data collection and analysis, decision to publish, or preparation of the manuscript.