Assessment of Gene Flow Between Gossypium hirsutum and G. herbaceum: Evidence of Unreduced Gametes in the Diploid Progenitor 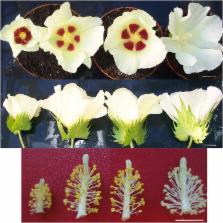 In the framework of a gene flow assessment, we investigated the natural hybridization rate between Gossypium hirsutum (AADD genome) and G. herbaceum (AA genome). The latter species, a diploid progenitor of G. hirsutum, is spontaneously present in South Africa. Reciprocal crosses were performed without emasculation between G. herbaceum and G. hirsutum. Neither examination of the morphological characteristics nor flow cytometry analysis of the 335 plants resulting from the G. hirsutum × G. herbaceum cross showed any hybrid features. Of the 148 plants produced from the G. herbaceum × G. hirsutum cross, three showed a hybrid phenotype, and their hybrid status was confirmed by SSR markers. Analysis of DNA content by flow cytometry and morphological traits clearly showed that two of these plants were triploid (AAD). The third plant had a flow cytometry DNA content slightly higher than G. hirsutum. In addition, its morphological characteristics (plant architecture, presence and size of petal spots, leaf shape) led us to conclude that this plant was AAAD thus resulting from fertilization with an unreduced AA gamete of the female G. herbaceum parent. Fluorescent In Situ Hybridization (FISH) and meiotic behavior confirmed this hypothesis. To the best of our knowledge, this is the first description of such gametes in G. herbaceum, and it opens new avenues in breeding programs. Furthermore, this plant material could provide a useful tool for studying the expression of genes duplicated in the A and D cotton genome.

Cloning and characterization of ribosomal RNA genes from wheat and barley.

J R Bedbrook,  Travis Gerlach (1979)
Wheat and barley DNA enriched for ribosomal RNA genes was isolated from actinomycin D-CsCl gradients and used to clone the ribosomal repeating units in the plasmid pAC184. All five chimeric plasmids isolated which contained wheat rDNA and eleven of the thirteen which had barley rDNA were stable and included full length ribosomal repeating units. Physical maps of all length variants cloned have been constructed using the restriction endonucleases Eco Rl, Bam Hl, Bgl II, Hind III and Sal I. Length variation in the repeat units was attributed to differences in the spacer regions. Comparison of Hae III and Hpa II digestion of cereal rDNAs and the cloned repeats suggests that most methylated cytosines in natural rDNA are in -CpG-. Incomplete methylation occurs at specific Bam Hl sites in barley DNA. Detectable quantities of ribosomal spacer sequences are not present at any genomic locations other than those of the ribosomal RNA gene repeats.

Anthony Chan,  Maruthachalam Ravi (2010)
Production of haploid plants that inherit chromosomes from only one parent can greatly accelerate plant breeding. Haploids generated from a heterozygous individual and converted to diploid create instant homozygous lines, bypassing generations of inbreeding. Two methods are generally used to produce haploids. First, cultured gametophyte cells may be regenerated into haploid plants, but many species and genotypes are recalcitrant to this process. Second, haploids can be induced from rare interspecific crosses, in which one parental genome is eliminated after fertilization. The molecular basis for genome elimination is not understood, but one theory posits that centromeres from the two parent species interact unequally with the mitotic spindle, causing selective chromosome loss. Here we show that haploid Arabidopsis thaliana plants can be easily generated through seeds by manipulating a single centromere protein, the centromere-specific histone CENH3 (called CENP-A in human). When cenh3 null mutants expressing altered CENH3 proteins are crossed to wild type, chromosomes from the mutant are eliminated, producing haploid progeny. Haploids are spontaneously converted into fertile diploids through meiotic non-reduction, allowing their genotype to be perpetuated. Maternal and paternal haploids can be generated through reciprocal crosses. We have also exploited centromere-mediated genome elimination to convert a natural tetraploid Arabidopsis into a diploid, reducing its ploidy to simplify breeding. As CENH3 is universal in eukaryotes, our method may be extended to produce haploids in any plant species.

Sequence organization of the repeating units in the nucleus of wheat which contain 5S rRNA genes.

Kelly Dyer,  Travis Gerlach (1980)
Examples of both the 410 and 500 bp size classes of repeating units containing wheat 5S rRNA genes have been cloned in plasmid pBR322 and sequenced. The structural genes showed sequence microheterogeneity. Also the gene in the 500 bp repeat which was sequenced had a 15 bp tandem duplication within it and appears to be representative of non-transcribed subfamily of repeating units. The transcription terminators comprise 14-17 A.T bp immediately preceded by a region of weak dyad symmetry. The spacer regions adjacent to the transcription terminators in the two different size repeat units have interspersed oligonucleotides of high and low homology. The central spacer regions of the two size classes have very different sequences. The only repeated sequence in the spacers has undergone extensive divergence. In contrast to most of the spacer, the 70 bp region preceding the genes of each type of repeat show high homology, suggesting that it has functional importance. The transcription start point obeys the pyrimidine-1 purine+1 rule.