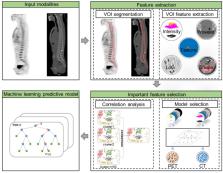 18F-FDG PET / CT is used clinically for the detection of extramedullary lesions in patients with relapsed acute leukemia (AL). However, the visual analysis of 18F-FDG diffuse bone marrow uptake in detecting bone marrow involvement (BMI) in routine clinical practice is still challenging. This study aims to improve the diagnostic performance of 18F-FDG PET/CT in detecting BMI for patients with suspected relapsed AL.

Methods: Forty-one patients (35 in training group and 6 in independent validation group) with suspected relapsed AL were retrospectively included in this study. All patients underwent both bone marrow biopsy (BMB) and 18F-FDG PET/CT within one week. The BMB results were used as the gold standard or real “truth” for BMI. The bone marrow 18F-FDG uptake was visually diagnosed as positive and negative by three nuclear medicine physicians. The skeletal volumes of interest were manually drawn on PET/CT images. A total of 781 PET and 1045 CT radiomic features were automatically extracted to provide a more comprehensive understanding of the embedded pattern. To select the most important and predictive features, an unsupervised consensus clustering method was first performed to analyze the feature correlations and then used to guide a random forest supervised machine learning model for feature importance analysis. Cross-validation and independent validation were conducted to justify the performance of our model.

Results: The training group involved 16 BMB positive and 19 BMB negative patients. Based on the visual analysis of 18F-FDG PET, 3 patients had focal uptake, 8 patients had normal uptake, and 24 patients had diffuse uptake. The sensitivity, specificity, and accuracy of visual analysis for BMI diagnosis were 62.5%, 73.7%, and 68.6%, respectively. With the cross-validation on the training group, the machine learning model correctly predicted 31 patients in BMI. The sensitivity, specificity, and accuracy of the machine learning model in BMI detection were 87.5%, 89.5%, and 88.6%, respectively, significantly higher than the ones in visual analysis ( P < 0.05). The evaluation on the independent validation group showed that the machine learning model could achieve 83.3% accuracy.

Anastasia Chalkidou,  Michael O’Doherty,  Paul Marsden … (2015)
Purpose A number of recent publications have proposed that a family of image-derived indices, called texture features, can predict clinical outcome in patients with cancer. However, the investigation of multiple indices on a single data set can lead to significant inflation of type-I errors. We report a systematic review of the type-I error inflation in such studies and review the evidence regarding associations between patient outcome and texture features derived from positron emission tomography (PET) or computed tomography (CT) images. Methods For study identification PubMed and Scopus were searched (1/2000–9/2013) using combinations of the keywords texture, prognostic, predictive and cancer. Studies were divided into three categories according to the sources of the type-I error inflation and the use or not of an independent validation dataset. For each study, the true type-I error probability and the adjusted level of significance were estimated using the optimum cut-off approach correction, and the Benjamini-Hochberg method. To demonstrate explicitly the variable selection bias in these studies, we re-analyzed data from one of the published studies, but using 100 random variables substituted for the original image-derived indices. The significance of the random variables as potential predictors of outcome was examined using the analysis methods used in the identified studies. Results Fifteen studies were identified. After applying appropriate statistical corrections, an average type-I error probability of 76% (range: 34–99%) was estimated with the majority of published results not reaching statistical significance. Only 3/15 studies used a validation dataset. For the 100 random variables examined, 10% proved to be significant predictors of survival when subjected to ROC and multiple hypothesis testing analysis. Conclusions We found insufficient evidence to support a relationship between PET or CT texture features and patient survival. Further fit for purpose validation of these image-derived biomarkers should be supported by appropriate biological and statistical evidence before their association with patient outcome is investigated in prospective studies.