Primary Splenic Angiosarcoma Presenting as Idiopathic Thrombocytopenic Purpura: A Case Report and Review of the Literature 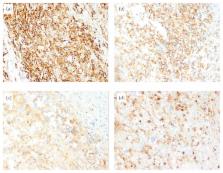 Angiosarcoma of the spleen is a rare malignancy that arises from vascular endothelial origin. This neoplasm is highly malignant and diagnosis is often delayed due to the vague presentation of clinical symptoms. A case report and concise review of the current diagnostic criteria and surgical treatment are provided to aid in the detection and treatment of this malignancy. We present a case of a 56-year-old female who presented with massive splenomegaly secondary to angiosarcoma of the spleen. The patient suffered from longstanding symptomatic anemia and thrombocytopenia. Diagnosis of a splenic angiosarcoma can be difficult due to the vague presentation and lack of concrete risk factors. Early identification and splenectomy are paramount. However, it is an aggressive malignancy with poor prognosis. We reviewed the literature of the current diagnostic and surgical treatment of primary splenic angiosarcoma.

Robin Young,  Nicola J M Brown,  Malcolm Reed … (2010)
Angiosarcomas are rare soft-tissue sarcomas of endothelial cell origin that have a poor prognosis. They can arise anywhere in the body, most commonly presenting as cutaneous disease in elderly white men, involving the head and neck and particularly the scalp. They can be caused by therapeutic radiation or chronic lymphoedema and hence secondary breast angiosarcomas are an important subgroup. Recent work has sought to establish the molecular biology of angiosarcomas and identify specific targets for treatment. Interest is now focused on trials of vascular-targeted drugs, which are showing promise in the control of angiosarcomas. In this review we discuss angiosarcoma and its current management, with a focus on clinical trials investigating the treatment of advanced disease. Copyright © 2010 Elsevier Ltd. All rights reserved.

Nicolas Penel,  Nicolas Isambert,  C Fournier … (2008)
The objective of this phase II trial was to assess the efficacy and toxicity of weekly paclitaxel for patients with metastatic or unresectable angiosarcoma. Thirty patients were entered onto the study from April 2005 through October 2006. Paclitaxel was administered intravenously as a 60-minute infusion at a dose of 80 mg/m(2) on days 1, 8, and 15 of a 4-week cycle. The primary end point was the nonprogression rate after two cycles. The progression-free survival rates after 2 and 4 months were 74% and 45%, respectively. With a median follow-up of 8 months, the median time to progression was 4 months and the median overall survival was 8 months. The progression-free survival rate was similar in patients pretreated with chemotherapy and in chemotherapy-naïve patients (77% v 71%). Three patients with locally advanced breast angiosarcoma presented partial response, which enabled a secondary curative-intent surgery with complete histologic response in two cases. One toxic death occurred as a result of a thrombocytopenia episode. Six patients presented with grade 3 toxicities and one patient presented with a grade 4 toxicity. Anemia and fatigue were the most frequently reported toxicities. Weekly paclitaxel at the dose schedule used in the current study was well tolerated and demonstrated clinical benefit.

Prognostic factors for the outcome of chemotherapy in advanced soft tissue sarcoma: an analysis of 2,185 patients treated with anthracycline-containing first-line regimens--a European Organization for Research and Treatment of Cancer Soft Tissue and Bone Sarcoma Group Study.

Odile van den Heuvel,  Jaco Verweij,  Armando Santoro … (1998)
A total of 2,185 patients with advanced soft tissue sarcomas who had been treated in seven clinical trials investigating the use of doxorubicin- or epirubicin-containing regimens as first-line chemotherapy were studied in this prognostic-factor analysis. Overall survival time (median, 51 weeks) and response to chemotherapy (26% complete response or partial response) were the two end points. The cofactors were sex; age; performance status; prior therapies; the presence of locoregional or recurrent disease; lung, liver, and bone metastases at the time of entry onto the trial; long time period between the initial diagnosis of sarcoma and entry onto the study; and histologic type and grade. Univariate analyses showed (a) a significant, favorable influence of good performance status, young age, and absence of liver metastases on both survival time and response rate, (b) a significant, favorable influence of low histopathologic disease grade on survival time, despite a significantly lower response rate, (c) increased survival time for patients with a long time period between the initial diagnosis of sarcoma and entry onto the study, despite equivalent response rates, and (d) increased survival time with liposarcoma or synovial sarcoma, a decreased survival time with malignant fibrous histiocytoma, a lower response rate with leiomyosarcoma, and a higher response rate with liposarcoma (P < .05 for all log-rank and chi2 tests). The Cox model selected good performance status (P < .0001), absence of liver metastases (P = .0001), low histopathologic grade (P = .0002), long time lapse since initial diagnosis (P = .0004), and young age (P = .0045) as favorable prognostic factors of survival time. The logistic model selected absence of liver metastases (P < .0001), young age (P = .0024), high histopathologic grade (P = .0051), and liposarcoma (P = .0065) as favorable prognostic factors of response rate. This analysis demonstrates that for advanced soft tissue sarcoma, response to chemotherapy is not predicted by the same factors as is overall survival time. This needs to be taken into account in the interpretation of trials assessing the value of new agents for this disease on the basis of response to treatment.