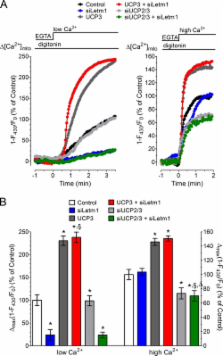 György Csordás,  Péter Várnai,  Tünde Golenár … (2010)
The ER-mitochondrial junction provides a local calcium signaling domain that is critical for both matching energy production with demand and the control of apoptosis. Here, we visualize ER-mitochondrial contact sites and monitor the localized [Ca(2+)] changes ([Ca(2+)](ER-mt)) using drug-inducible fluorescent interorganelle linkers. We show that all mitochondria have contacts with the ER, but plasma membrane (PM)-mitochondrial contacts are less frequent because of interleaving ER stacks in both RBL-2H3 and H9c2 cells. Single mitochondria display discrete patches of ER contacts and show heterogeneity in the ER-mitochondrial Ca(2+) transfer. Pericam-tagged linkers revealed IP(3)-induced [Ca(2+)](ER-mt) signals that exceeded 9 microM and endured buffering bulk cytoplasmic [Ca(2+)] increases. Altering linker length to modify the space available for the Ca(2+) transfer machinery had a biphasic effect on [Ca(2+)](ER-mt) signals. These studies provide direct evidence for the existence of high-Ca(2+) microdomains between the ER and mitochondria and suggest an optimal gap width for efficient Ca(2+) transfer. 2010 Elsevier Inc. All rights reserved.

A Sawano,  J. Park,  T Nagai … (2001)
To visualize Ca(2+)-dependent protein-protein interactions in living cells by fluorescence readouts, we used a circularly permuted green fluorescent protein (cpGFP), in which the amino and carboxyl portions had been interchanged and reconnected by a short spacer between the original termini. The cpGFP was fused to calmodulin and its target peptide, M13. The chimeric protein, which we have named "pericam," was fluorescent and its spectral properties changed reversibly with the amount of Ca(2+), probably because of the interaction between calmodulin and M13 leading to an alteration of the environment surrounding the chromophore. Three types of pericam were obtained by mutating several amino acids adjacent to the chromophore. Of these, "flash-pericam" became brighter with Ca(2+), whereas "inverse-pericam" dimmed. On the other hand, "ratiometric-pericam" had an excitation wavelength changing in a Ca(2+)-dependent manner. All of the pericams expressed in HeLa cells were able to monitor free Ca(2+) dynamics, such as Ca(2+) oscillations in the cytosol and the nucleus. Ca(2+) imaging using high-speed confocal line-scanning microscopy and a flash-pericam allowed to detect the free propagation of Ca(2+) ions across the nuclear envelope. Then, free Ca(2+) concentrations in the nucleus and mitochondria were simultaneously measured by using ratiometric-pericams having appropriate localization signals, revealing that extra-mitochondrial Ca(2+) transients caused rapid changes in the concentration of mitochondrial Ca(2+). Finally, a "split-pericam" was made by deleting the linker in the flash-pericam. The Ca(2+)-dependent interaction between calmodulin and M13 in HeLa cells was monitored by the association of the two halves of GFP, neither of which was fluorescent by itself.