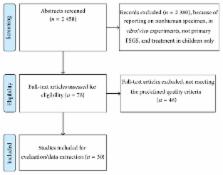 Adult primary focal segmental glomerulosclerosis (FSGS) remains a therapeutic challenge for the treating physician. With the advent of novel immunosuppressive measures, our arsenal of therapeutic options increased considerably. The aim of this review was to summarize reports published over the last two decades which reported on treatment outcome. Most reports included patients with a steroid-resistant (SR) disease course, yet the cohort with the highest unmet need, since persistent nephrotic range proteinuria is associated with a poor renal prognosis and portends a high risk of developing end-stage renal disease. While in first-line treatment, steroid treatment remains the recommended standard with an overall remission rate of 50% and higher, optimal treatment strategies for steroid-dependent/multirelapsing (SD/MR) and SR patients have to be defined. In both entities, calcineurin inhibitors showed good efficacy, while mycophenolate mofetil was less effective in SR cases compared to those with SD/MR. The same was true for rituximab, a monoclonal antibody targeting B-cells. In resistant cases, addition of extracorporeal treatment options or treatment with alkylating agents may be considered. To shape the future for treatment of FSGS, international collaborations to conduct larger clinical trials are needed to identify potential novel efficacious immunosuppressive or immunomodulatory therapies.

Thomas Burke,  W Seeherunvong,  Alessia Fornoni … (2011)
Focal segmental glomerulosclerosis (FSGS) is a glomerular disease characterized by proteinuria, progression to end-stage renal disease, and recurrence of proteinuria after kidney transplantation in about one-third of patients. It has been suggested that rituximab might treat recurrent FSGS through an unknown mechanism. Rituximab not only recognizes CD20 on B lymphocytes, but might also bind sphingomyelin phosphodiesterase acid-like 3b (SMPDL-3b) protein and regulate acid sphingomyelinase (ASMase) activity. We hypothesized that rituximab prevents recurrent FSGS and preserves podocyte SMPDL-3b expression. We studied 41 patients at high risk for recurrent FSGS, 27 of whom were treated with rituximab at time of kidney transplant. SMPDL-3b protein, ASMase activity, and cytoskeleton remodeling were studied in cultured normal human podocytes that had been exposed to patient sera with or without rituximab. Rituximab treatment was associated with lower incidence of posttransplant proteinuria and stabilization of glomerular filtration rate. The number of SMPDL-3b(+) podocytes in postreperfusion biopsies was reduced in patients who developed recurrent FSGS. Rituximab partially prevented SMPDL-3b and ASMase down-regulation that was observed in podocytes treated with the sera of patients with recurrent FSGS. Overexpression of SMPDL-3b or treatment with rituximab was able to prevent disruption of the actin cytoskeleton and podocyte apoptosis induced by patient sera. This effect was diminished in cultured podocytes where SMPDL-3b was silenced. Our study suggests that treatment of high-risk patients with rituximab at time of kidney transplant might prevent recurrent FSGS by modulating podocyte function in an SMPDL-3b-dependent manner.

Focal and segmental glomerulosclerosis: definition and relevance of a partial remission.

,  Thomas A. Miller,  Stéphan Troyanov … (2005)
Focal and segmental glomerulosclerosis (FSGS) is one of the most common primary glomerular diseases to terminate in ESRD. A complete remission (CR) confers an excellent long-term prognosis, but the quantitative benefits of partial remissions (PR) have not been defined. This study evaluated the rate of renal function decline (slope of creatinine clearance) and renal survival in nephrotic FSGS patients with CR, PR, or no remission. It also examined relapse rate from remission and its impact on outcome. Multivariate analysis included clinical and laboratory data at presentation and over follow-up, BP control, the agents used, and immunosuppressive therapy. The study cohort was 281 nephrotic FSGS patients who had a minimum of 12 mo of observation and were identified from the Toronto Glomerulonephritis Registry. Over a median follow-up of 65 mo, 55 experienced a CR, 117 had a PR, and 109 had no remission. A PR was independently predictive of slope and survival from renal failure by multivariate analysis (adjusted time-dependent hazard ratio, 0.48; 95% confidence interval, 0.24 to 0.96; P = 0.04). Immunosuppression with high-dose prednisone was associated with a higher rate of PR and CR. Relapse from PR was frequent (56%) and associated with a more rapid rate of renal function decline and worse renal survival compared with relapse-free partial remitters. Only female gender and the nadir of proteinuria during remission were associated with a sustained remission. A PR in proteinuria and its maintenance are important therapeutic targets in FSGS, with implications for both slowing progression rate and improving renal survival.

Twenty-one-year trend in ESRD due to focal segmental glomerulosclerosis in the United States.

Paul Eggers,  Jeffrey B Kopp,  Chagriya Kitiyakara (2004)
Focal segmental glomerulosclerosis (FSGS) is a clinicopathologic syndrome with a substantial risk for progression to end-stage renal disease (ESRD). Recent studies of renal biopsy archives in the United States suggest that the incidence of FSGS has increased. FSGS has become the leading cause of idiopathic nephrotic syndrome in the United States, with the greatest incidence rates in the black population. In the absence of a population-based estimate of FSGS incidence, we wished to obtain a population-based estimate of incident ESRD cases caused by FSGS (FSGS ESRD) and characterize temporal changes in this group. We examined the incidence of FSGS ESRD during a 21-year period (1980 to 2000) using data from the United States Renal Data System. We excluded patients who were classified as having acquired immunodeficiency syndrome nephropathy. The annual incidence of FSGS ESRD has increased considerably, whether expressed as an absolute number or a fraction of the total incident ESRD population. Thus, the proportion of ESRD attributed to FSGS has increased 11-fold, from 0.2% in 1980 to 2.3% in 2000. The recent increase in incident FSGS ESRD cases likely is multifactorial in origin, with contributions from changes in renal biopsy practices, changes in disease classification, and a real increase in the incidence of FSGS disease. Black individuals have a 4-fold greater risk of FSGS ESRD than white or Asian individuals. The peak decade for FSGS ESRD incidence is 40 to 49 years among black subjects and 70 to 79 years among white and Asian individuals. Males have 1.5- to 2-fold greater risk than females. The incidence of FSGS ESRD has increased considerably in the United States, with black individuals at greatest risk. Idiopathic FSGS now is the most common cause of ESRD caused by primary glomerular disease in the United States in both the black and white populations.