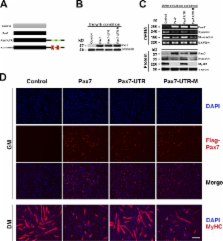 Pax7 is a target of two miRNAs that are induced during muscle satellite cell differentiation and repressed in response to muscle injury.

p63 is essential for regenerative proliferation in limb, craniofacial and epithelial development.

Geoffrey Tabin,  Jason A Sharpe,  Jessica D Sun … (1999)
The p63 gene, a homologue of the tumour-suppressor p53, is highly expressed in the basal or progenitor layers of many epithelial tissues. Here we report that mice homozygous for a disrupted p63 gene have major defects in their limb, craniofacial and epithelial development. p63 is expressed in the ectodermal surfaces of the limb buds, branchial arches and epidermal appendages, which are all sites of reciprocal signalling that direct morphogenetic patterning of the underlying mesoderm. The limb truncations are due to a failure to maintain the apical ectodermal ridge, a stratified epithelium, essential for limb development. The embryonic epidermis of p63-/- mice undergoes an unusual process of non-regenerative differentiation, culminating in a striking absence of all squamous epithelia and their derivatives, including mammary, lacrymal and salivary glands. Taken together, our results indicate that p63 is critical for maintaining the progenitor-cell populations that are necessary to sustain epithelial development and morphogenesis.

Dicer is essential for mouse development.

Lisa Mills,  James V. Anderson,  S. H. Kim … (2003)
To address the biological function of RNA interference (RNAi)-related pathways in mammals, we disrupted the gene Dicer1 in mice. Loss of Dicer1 lead to lethality early in development, with Dicer1-null embryos depleted of stem cells. Coupled with our inability to generate viable Dicer1-null embryonic stem (ES) cells, this suggests a role for Dicer, and, by implication, the RNAi machinery, in maintaining the stem cell population during early mouse development.

Alla Grishok,  Amy E. Pasquinelli,  Darryl Conte … (2001)
RNAi is a gene-silencing phenomenon triggered by double-stranded (ds) RNA and involves the generation of 21 to 26 nt RNA segments that guide mRNA destruction. In Caenorhabditis elegans, lin-4 and let-7 encode small temporal RNAs (stRNAs) of 22 nt that regulate stage-specific development. Here we show that inactivation of genes related to RNAi pathway genes, a homolog of Drosophila Dicer (dcr-1), and two homologs of rde-1 (alg-1 and alg-2), cause heterochronic phenotypes similar to lin-4 and let-7 mutations. Further we show that dcr-1, alg-1, and alg-2 are necessary for the maturation and activity of the lin-4 and let-7 stRNAs. Our findings suggest that a common processing machinery generates guide RNAs that mediate both RNAi and endogenous gene regulation.