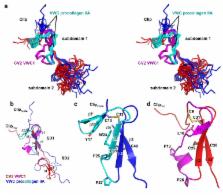 Bone Morphogenetic Proteins (BMPs) are secreted protein hormones that act as morphogens and exert essential roles during embryonic development of tissues and organs. Signaling by BMPs occurs via hetero-oligomerization of two types of serine/threonine kinase transmembrane receptors. Due to the small number of available receptors for a large number of BMP ligands ligand-receptor promiscuity presents an evident problem requiring additional regulatory mechanisms for ligand-specific signaling. Such additional regulation is achieved through a plethora of extracellular antagonists, among them members of the Chordin superfamily, that modulate BMP signaling activity by binding. The key-element in Chordin-related antagonists for interacting with BMPs is the von Willebrand type C (VWC) module, which is a small domain of about 50 to 60 residues occurring in many different proteins. Although a structure of the VWC domain of the Chordin-member Crossveinless 2 (CV2) bound to BMP-2 has been determined by X-ray crystallography, the molecular mechanism by which the VWC domain binds BMPs has remained unclear. Here we present the NMR structure of the Danio rerio CV2 VWC1 domain in its unbound state showing that the key features for high affinity binding to BMP-2 is a pre-oriented peptide loop.

J Massagué (2000)
Cell proliferation, differentiation and death are controlled by a multitude of cell-cell signals, and loss of this control has devastating consequences. Prominent among these regulatory signals is the transforming growth factor-beta (TGF-beta) family of cytokines, which can trigger a bewildering diversity of responses, depending on the genetic makeup and environment of the target cell. What are the networks of cell-specific molecules that mould the TGF-beta response to each cell's needs?