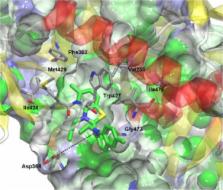 Antiretroviral therapy has transformed HIV-1 infection into a managed condition with near-normal life expectancy. However, a significant number of patients remain with limited therapeutic options due to HIV-1 resistance, side effects, or drug costs. Further, it is likely that current drugs will not retain efficacy, due to risks of side effects and transmitted resistance.

We describe compound 5660386 (3-ethyl-2-[3-(1,3,3-trimethyl-1,3-dihydro-2 H-indol-2-ylidene)-1-propen-1-yl]-1,3-benzothiazol-3-ium) as a novel inhibitor of HIV-1 entry. Compound 5660386 inhibits HIV-1 entry in cell lines and primary cells, binds to HIV-1 envelope protein, and inhibits the interaction of GP120 to CD4. Further, compound 5660386 showed a unique and broad-range activity against primary HIV-1 isolates from different subtypes and geographical areas.

Development of small-molecule entry inhibitors of HIV-1 such as 5660386 may lead to novel classes of anti-HIV-1 therapeutics. These inhibitors may be particularly effective against viruses resistant to current antiretroviral drugs and could have potential applications in both treatment and prevention.

Paul Griffin,  C Napier,  Blanda Stammen … (2005)
Maraviroc (UK-427,857) is a selective CCR5 antagonist with potent anti-human immunodeficiency virus type 1 (HIV-1) activity and favorable pharmacological properties. Maraviroc is the product of a medicinal chemistry effort initiated following identification of an imidazopyridine CCR5 ligand from a high-throughput screen of the Pfizer compound file. Maraviroc demonstrated potent antiviral activity against all CCR5-tropic HIV-1 viruses tested, including 43 primary isolates from various clades and diverse geographic origin (geometric mean 90% inhibitory concentration of 2.0 nM). Maraviroc was active against 200 clinically derived HIV-1 envelope-recombinant pseudoviruses, 100 of which were derived from viruses resistant to existing drug classes. There was little difference in the sensitivity of the 200 viruses to maraviroc, as illustrated by the biological cutoff in this assay (= geometric mean plus two standard deviations [SD] of 1.7-fold). The mechanism of action of maraviroc was established using cell-based assays, where it blocked binding of viral envelope, gp120, to CCR5 to prevent the membrane fusion events necessary for viral entry. Maraviroc did not affect CCR5 cell surface levels or associated intracellular signaling, confirming it as a functional antagonist of CCR5. Maraviroc has no detectable in vitro cytotoxicity and is highly selective for CCR5, as confirmed against a wide range of receptors and enzymes, including the hERG ion channel (50% inhibitory concentration, >10 microM), indicating potential for an excellent clinical safety profile. Studies in preclinical in vitro and in vivo models predicted maraviroc to have human pharmacokinetics consistent with once- or twice-daily dosing following oral administration. Clinical trials are ongoing to further investigate the potential of using maraviroc for the treatment of HIV-1 infection and AIDS.

Li-dong Wu,  Vineet KewalRamani (2006)
Dendritic cells (DCs) are crucial for the generation and the regulation of adaptive immunity. Because DCs have a pivotal role in marshalling immune responses, HIV has evolved ways to exploit DCs, thereby facilitating viral dissemination and allowing evasion of antiviral immunity. Defining the mechanisms that underlie cell-cell transmission of HIV and understanding the role of DCs in this process should help us in the fight against HIV infection. This Review highlights the latest advances in our understanding of the interactions between DCs and HIV, focusing on the mechanisms of DC-mediated viral dissemination.

Jeffrey Chang,  Mary E. Klotman,  Theresa L-Y Chang (2006)
Defensins are small antimicrobial peptides that are produced by leukocytes and epithelial cells, and that have an important role in innate immunity. Recent advances in understanding the mechanisms of the antiviral action(s) of defensins indicate that they have a dual role in antiviral defence, acting directly on the virion and on the host cell. This Review focuses on the antiviral activities and mechanisms of action of mammalian defensins, and on the clinical relevance of these activities. Understanding the complex function of defensins in innate immunity against viral infection has implications for the prevention and treatment of viral disease.