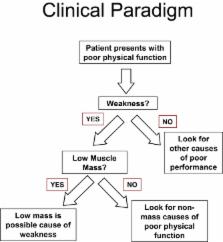 Low muscle mass and weakness are common and potentially disabling in older adults, but in order to become recognized as a clinical condition, criteria for diagnosis should be based on clinically relevant thresholds and independently validated. The Foundation for the National Institutes of Health Biomarkers Consortium Sarcopenia Project used an evidence-based approach to develop these criteria. Initial findings were presented at a conference in May 2012, which generated recommendations that guided additional analyses to determine final recommended criteria. Details of the Project and its findings are presented in four accompanying manuscripts.

The pooled sample included 26,625 participants (57% women, mean age in men 75.2 [±6.1 SD] and in women 78.6 [±5.9] years). Conference attendees emphasized the importance of evaluating the influence of body mass on cutpoints. Based on the analyses presented in this series, the final recommended cutpoints for weakness are grip strength <26kg for men and <16kg for women, and for low lean mass, appendicular lean mass adjusted for body mass index <0.789 for men and <0.512 for women.

These evidence-based cutpoints, based on a large and diverse population, may help identify participants for clinical trials and should be evaluated among populations with high rates of functional limitations.

The Seventh Report of the Joint National Committee on Prevention, Detection, Evaluation, and Treatment of High Blood Pressure: the JNC 7 report.

Aram Chobanian (2003)
"The Seventh Report of the Joint National Committee on Prevention, Detection, Evaluation, and Treatment of High Blood Pressure" provides a new guideline for hypertension prevention and management. The following are the key messages(1) In persons older than 50 years, systolic blood pressure (BP) of more than 140 mm Hg is a much more important cardiovascular disease (CVD) risk factor than diastolic BP; (2) The risk of CVD, beginning at 115/75 mm Hg, doubles with each increment of 20/10 mm Hg; individuals who are normotensive at 55 years of age have a 90% lifetime risk for developing hypertension; (3) Individuals with a systolic BP of 120 to 139 mm Hg or a diastolic BP of 80 to 89 mm Hg should be considered as prehypertensive and require health-promoting lifestyle modifications to prevent CVD; (4) Thiazide-type diuretics should be used in drug treatment for most patients with uncomplicated hypertension, either alone or combined with drugs from other classes. Certain high-risk conditions are compelling indications for the initial use of other antihypertensive drug classes (angiotensin-converting enzyme inhibitors, angiotensin-receptor blockers, beta-blockers, calcium channel blockers); (5) Most patients with hypertension will require 2 or more antihypertensive medications to achieve goal BP (<140/90 mm Hg, or <130/80 mm Hg for patients with diabetes or chronic kidney disease); (6) If BP is more than 20/10 mm Hg above goal BP, consideration should be given to initiating therapy with 2 agents, 1 of which usually should be a thiazide-type diuretic; and (7) The most effective therapy prescribed by the most careful clinician will control hypertension only if patients are motivated. Motivation improves when patients have positive experiences with and trust in the clinician. Empathy builds trust and is a potent motivator. Finally, in presenting these guidelines, the committee recognizes that the responsible physician's judgment remains paramount.

Alfonso Cruz-Jentoft,  Jean-Pierre Baeyens,  Jürgen Bauer … (2010)
The European Working Group on Sarcopenia in Older People (EWGSOP) developed a practical clinical definition and consensus diagnostic criteria for age-related sarcopenia. EWGSOP included representatives from four participant organisations, i.e. the European Geriatric Medicine Society, the European Society for Clinical Nutrition and Metabolism, the International Association of Gerontology and Geriatrics—European Region and the International Association of Nutrition and Aging. These organisations endorsed the findings in the final document. The group met and addressed the following questions, using the medical literature to build evidence-based answers: (i) What is sarcopenia? (ii) What parameters define sarcopenia? (iii) What variables reflect these parameters, and what measurement tools and cut-off points can be used? (iv) How does sarcopenia relate to cachexia, frailty and sarcopenic obesity? For the diagnosis of sarcopenia, EWGSOP recommends using the presence of both low muscle mass + low muscle function (strength or performance). EWGSOP variously applies these characteristics to further define conceptual stages as ‘presarcopenia’, ‘sarcopenia’ and ‘severe sarcopenia’. EWGSOP reviewed a wide range of tools that can be used to measure the specific variables of muscle mass, muscle strength and physical performance. Our paper summarises currently available data defining sarcopenia cut-off points by age and gender; suggests an algorithm for sarcopenia case finding in older individuals based on measurements of gait speed, grip strength and muscle mass; and presents a list of suggested primary and secondary outcome domains for research. Once an operational definition of sarcopenia is adopted and included in the mainstream of comprehensive geriatric assessment, the next steps are to define the natural course of sarcopenia and to develop and define effective treatment.

K Faulkner,  Marjolein Visser,  Peggy Cawthon … (2011)
Survival estimates help individualize goals of care for geriatric patients, but life tables fail to account for the great variability in survival. Physical performance measures, such as gait speed, might help account for variability, allowing clinicians to make more individualized estimates. To evaluate the relationship between gait speed and survival. Pooled analysis of 9 cohort studies (collected between 1986 and 2000), using individual data from 34,485 community-dwelling older adults aged 65 years or older with baseline gait speed data, followed up for 6 to 21 years. Participants were a mean (SD) age of 73.5 (5.9) years; 59.6%, women; and 79.8%, white; and had a mean (SD) gait speed of 0.92 (0.27) m/s. Survival rates and life expectancy. There were 17,528 deaths; the overall 5-year survival rate was 84.8% (confidence interval [CI], 79.6%-88.8%) and 10-year survival rate was 59.7% (95% CI, 46.5%-70.6%). Gait speed was associated with survival in all studies (pooled hazard ratio per 0.1 m/s, 0.88; 95% CI, 0.87-0.90; P < .001). Survival increased across the full range of gait speeds, with significant increments per 0.1 m/s. At age 75, predicted 10-year survival across the range of gait speeds ranged from 19% to 87% in men and from 35% to 91% in women. Predicted survival based on age, sex, and gait speed was as accurate as predicted based on age, sex, use of mobility aids, and self-reported function or as age, sex, chronic conditions, smoking history, blood pressure, body mass index, and hospitalization. In this pooled analysis of individual data from 9 selected cohorts, gait speed was associated with survival in older adults.

This is an Open Access article distributed under the terms of the Creative Commons Attribution Non-Commercial License ( http://creativecommons.org/licenses/by-nc/3.0/), which permits non-commercial re-use, distribution, and reproduction in any medium, provided the original work is properly cited. For commercial re-use, please contact journals.permissions@oup.com.