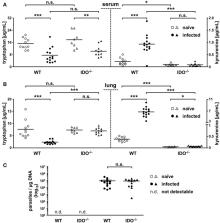 Toxoplasma gondii ( T. gondii) is an obligate intracellular parasite and belongs to the phylum Apicomplexa. T. gondii is of medical and veterinary importance, because T. gondii causes the parasitic disease toxoplasmosis. In human cells, the interferon-gamma inducible indoleamine 2,3-dioxygenase 1 (IDO1) is an antimicrobial effector mechanism that degrades tryptophan to kynurenine and thus limits pathogen proliferation in vitro. Furthermore, IDO is described to have immunosuppressive properties, e.g., regulatory T cell differentiation and T cell suppression in humans and mice. However, there is only little known about the role of IDO1 in mice during acute toxoplasmosis. To shed further light on the role of mIDO1 in vivo, we have used a specifically adjusted experimental model. Therein, we infected mIDO1-deficient (IDO −/−) C57BL/6 mice and appropriate wild-type (WT) control mice with a high dose of T. gondii ME49 tachyozoites (type II strain) via the intraperitoneal route and compared the phenotype of IDO −/− and WT mice during acute toxoplasmosis. During murine T. gondii infection, we found mIDO1 mRNA and mIDO1 protein, as well as mIDO1-mediated tryptophan degradation in lungs of WT mice. IDO −/− mice show no tryptophan degradation in the lung during infection. Even though T. gondii is tryptophan auxotroph and rapidly replicates during acute infection, the parasite load was similar in IDO −/− mice compared to WT mice 7 days post-infection. IDO1 is described to have immunosuppressive properties, and since T cell suppression is observed during acute toxoplasmosis, we analyzed the possible involvement of mIDO1. Here, we did not find differences in the intensity of ex vivo mitogen stimulated T cell proliferation between WT and IDO −/− mice. Concomitant nitric oxide synthase inhibition and interleukin-2 supplementation increased the T cell proliferation from both genotypes drastically, but not completely. In sum, we analyzed the involvement of mIDO1 during acute murine toxoplasmosis in our specifically adjusted experimental model and found a definite mIDO1 induction. Nevertheless, mIDO1 seems to be functional redundant as an antiparasitic defense mechanism during acute toxoplasmosis in mice. Furthermore, we suggest that the systemic T cell suppression observed during acute toxoplasmosis is influenced by nitric oxide activity and IL-2 deprivation.

Gerard Conway,  Simon J. Attwood,  D Munn … (1998)
In 1953 Medawar pointed out that survival of the genetically disparate (allogeneic) mammalian conceptus contradicts the laws of tissue transplantation. Rapid T cell-induced rejection of all allogeneic concepti occurred when pregnant mice were treated with a pharmacologic inhibitor of indoleamine 2,3-dioxygenase (IDO), a tryptophan-catabolizing enzyme expressed by trophoblasts and macrophages. Thus, by catabolizing tryptophan, the mammalian conceptus suppresses T cell activity and defends itself against rejection.

David Munn,  Ebrahim Shafizadeh,  John Attwood … (1999)
We have recently shown that expression of the enzyme indoleamine 2,3-dioxygenase (IDO) during murine pregnancy is required to prevent rejection of the allogeneic fetus by maternal T cells. In addition to their role in pregnancy, IDO-expressing cells are widely distributed in primary and secondary lymphoid organs. Here we show that monocytes that have differentiated under the influence of macrophage colony-stimulating factor acquire the ability to suppress T cell proliferation in vitro via rapid and selective degradation of tryptophan by IDO. IDO was induced in macrophages by a synergistic combination of the T cell–derived signals IFN-γ and CD40-ligand. Inhibition of IDO with the 1-methyl analogue of tryptophan prevented macrophage-mediated suppression. Purified T cells activated under tryptophan-deficient conditions were able to synthesize protein, enter the cell cycle, and progress normally through the initial stages of G1, including upregulation of IL-2 receptor and synthesis of IL-2. However, in the absence of tryptophan, cell cycle progression halted at a mid-G1 arrest point. Restoration of tryptophan to arrested cells was not sufficient to allow further cell cycle progression nor was costimulation via CD28. T cells could exit the arrested state only if a second round of T cell receptor signaling was provided in the presence of tryptophan. These data reveal a novel mechanism by which antigen-presenting cells can regulate T cell activation via tryptophan catabolism. We speculate that expression of IDO by certain antigen presenting cells in vivo allows them to suppress unwanted T cell responses.

D Stuehr,  Qing Ding,  Paul Nathan (1988)
The capacity of 12 cytokines to induce NO2- or H2O2 release from murine peritoneal macrophages was tested by using resident macrophages, or macrophages elicited with periodate, casein, or thioglycollate broth. Elevated H2O2 release in response to PMA was observed in resident macrophages after a 48-h incubation with IFN-gamma, TNF-alpha, TNF-beta, or CSF-GM. Of these, only IFN-gamma induced substantial NO2- secretion during the culture period. The cytokines inactive in both assays under the conditions tested were IL-1 beta, IL-2, IL-3, IL-4, IFN-alpha, IFN-beta, CSF-M, and transforming growth factor-beta 1. Incubation of macrophages with IFN-gamma for 48 h in the presence of LPS inhibited H2O2 production but augmented NO2- release, whereas incubation in the presence of the arginine analog NG-monomethylarginine inhibited NO2- release but not H2O2 production. Although neither TNF-alpha nor TNF-beta induced NO2- synthesis on its own, addition of either cytokine together with IFN-gamma increased macrophage NO2- production up to six-fold over that in macrophages treated with IFN-gamma alone. Moreover, IFN-alpha or IFN-beta in combination with LPS could also induce NO2- production in macrophages, as was previously reported for IFN-gamma plus LPS. These data suggest that: 1) tested as a sole agent, IFN-gamma was the only one of the 12 cytokines capable of inducing both NO2- and H2O2 release; 2) the pathways leading to secretion of H2O2 and NO2- are independent; 3) either IFN-gamma and TNF-alpha/beta or IFN-alpha/beta/gamma and LPS can interact synergistically to induce NO2- release.

This article was submitted to Parasite and Host, a section of the journal Frontiers in Cellular and Infection Microbiology