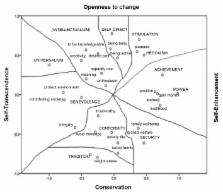 The first aim of this study is to investigate whether instruments developed with an emic approach in Turkey produce the same trait-value links obtained with studies using near universal instruments, and if emic traits and value concepts are composed under agency and communal conceptions. So, the first aim of this study is to inspect the conceptual similarities in the links between traits and values. The second aim is to examine the moderating effect of disposable income on the strength of the trait-value relationship. Undergraduate and graduate students (N = 595) from six universities in Istanbul responded to the Personality Profile Scale (PPS) and the Life Goal Values (LGV) questionnaire. Second order factor analysis indicated that indigenous value and trait items were representative of communal and agency conceptions. Furthermore, most of the value-trait links revealed with regression analysis, and the sinusoid relationships revealed with Pearson correlation coefficients were consistent with the findings measured with near universal instruments. Additionally found relationships between traits and especially conservation values can be interpreted as the instrumentality of agentic traits for personal as well for social focused values. Disposable income had a moderating effect on five trait-value relationships and three out of five were weaker in the low-income group.

Are There Universal Aspects in the Structure and Contents of Human Values?

R McCrae,  P T Costa (1997)
Patterns of covariation among personality traits in English-speaking populations can be summarized by the five-factor model (FFM). To assess the cross-cultural generalizability of the FFM, data from studies using 6 translations of the Revised NEO Personality Inventory (P.T. Costa & R. R. McCrae, 1992) were compared with the American factor structure. German, Portuguese, Hebrew, Chinese, Korean, and Japanese samples (N = 7,134) showed similar structures after varimax rotation of 5 factors. When targeted rotations were used, the American factor structure was closely reproduced, even at the level of secondary loadings. Because the samples studied represented highly diverse cultures with languages from 5 distinct language families, these data strongly suggest that personality trait structure is universal.