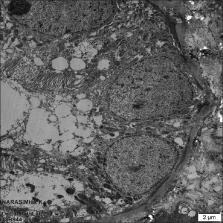 A known case of hypertension and recent onset diabetes presented to our neurological clinic with symptoms of ataxia, rigidity, and tremors. His symptoms were of relatively recent onset. He gave no history of any renal disease in past. The magnetic resonance imaging of the brain done by the neurologist was suggestive of demyelinating pathology. His renal functions showed progressive deterioration (Cr 1.4 mg/dl about 3 months back to 2.2 mg/dl at present) along with the onset of his neurological illness. An extensive work up for autoimmune encephalitis and paraneoplastic syndrome was noncontributory. A toxicology screen revealed high levels of aluminum in the blood. A renal biopsy showed features of interstitial nephritis and predominant vacuolar injury of the proximal tubule (suggestive of toxic injury.) On further questioning, the patient gave history of using an over the counter native medication. The medication was stopped and weekly desferrioxime chelation advised. A short course of steroids (0.5 mg/kg/day tapering dose for 6 weeks) was also given. The creatinine stabilized to 1.3 mg/dl on follow-up after 3 months. The neurological symptoms also resolved completely.

Molecular toxicity of aluminium in relation to neurodegeneration.

,  P. Vasudevaraju,  M Govindaraju … (2008)
Exposure to high levels of aluminium (Al) leads to neurofibrillary degeneration and that Al concentration is increased in degenerating neurons in Alzheimer's disease (AD). Nevertheless, the role of Al in AD remains controversial and there is little proof directly interlinking Al to AD. The major problem in understanding Al toxicity is the complex Al speciation chemistry in biological systems. A new dimension is provided to show that Al-maltolate treated aged rabbits can be used as a suitable animal model for understanding the pathology in AD. The intracisternal injection of Al-maltolate into aged New Zealand white rabbits results in pathology that mimics several of the neuropathological, biochemical and behavioural changes as observed in AD. The neurodegenerative effects include the formation of intraneuronal neurofilamentous aggregates that are tau positive, oxidative stress and apoptosis. The present review discusses the role of Al and use of Al-treated aged rabbit as a suitable animal model to understand AD pathogenesis.

Aluminium in Bone from Patients with Renal Failure

Susana Braga,  Nancy Martin,  T. Fernandez Perez Tomei … (2001)
Aluminium overload leads to parathyroid hormone (PTH) suppression. However, it is unclear whether a decrease in synthesis or release of the hormone is mainly involved. The aim of this study was to assess the effect of an acute administration of aluminium on PTH synthesis and release in rats with chronic renal failure and secondary hyperparathyroidism. The study was performed using 100 adult male Wistar rats (body weight 443+/-54 g). 7/8 nephrectomy was performed and the rats were maintained on a high dietary phosphorous intake. Five weeks after surgery, the rats were randomly divided into two groups, one loaded with aluminium (AlCl3) and the other given placebo. Aluminium or placebo were administered i.p. for two consecutive days. The placebo group received saline at the same pH as the aluminium solution. After 2 weeks, serum calcium, phosphorous, creatinine, PTH, and aluminium were measured. The parathyroid glands were removed and PTH messenger RNA (mRNA) was measured by northern blot. Intact PTH was measured by IRMA (Rat PTH, Nichols Institute). No differences in serum PTH levels were found between the two groups after 5 weeks of renal failure. At the end of the study the rats given aluminium had higher aluminium levels than the placebo group and lower PTH levels. No significant differences were found for calcium, phosphorous, renal function, or body weight. PTH mRNA expression was lower in the aluminium group than in the placebo group. The administration of aluminium in rats with chronic renal failure resulted in reductions in serum PTH and PTH mRNA. Thus far, previous studies had demonstrated that aluminium suppressed PTH release. The present findings suggest that PTH synthesis is also reduced.