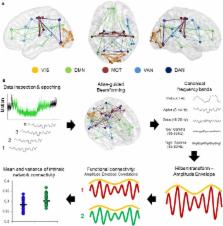 Concussion is a common form of mild traumatic brain injury. Despite the descriptor “mild,” a single injury can leave long-lasting and sustained alterations to brain function, including changes to localized activity and large-scale interregional communication. Cognitive complaints are thought to arise from such functional deficits. We investigated the impact of injury on neurophysiological and functionally specialized resting networks, known as intrinsic connectivity networks (ICNs), using magnetoencephalography. We assessed neurophysiological connectivity in 40 males, 20 with concussion and 20 without. Regions-of-interest that comprise nodes of ICNs were defined, and their time courses derived using a beamformer approach. Pairwise fluctuations and covariations in band-limited amplitude envelopes were computed reflecting measures of functional connectivity. Intra-network connectivity was compared between groups using permutation testing and correlated with symptoms. We observed increased resting spectral connectivity in the default mode network (DMN) and motor networks (MOTs) in our concussion group when compared with controls, across alpha through gamma ranges. Moreover, these differences were not explained by power spectrum density within the ICNs. Furthermore, this increased coupling was significantly associated with symptoms in the DMN and MOTs—but once accounting for comorbidities (including, depression, anxiety, and ADHD) only the DMN continued to be associated with symptoms. The DMN plays a critical role in shifting between cognitive tasks. These data suggest even a single concussion can perturb the intrinsic coupling of this functionally specialized network in the brain, and may explain persistent and wide-ranging symptomatology.

Structural and functional brain networks: from connections to cognition.

So Park,  Karl Friston (2013)
How rich functionality emerges from the invariant structural architecture of the brain remains a major mystery in neuroscience. Recent applications of network theory and theoretical neuroscience to large-scale brain networks have started to dissolve this mystery. Network analyses suggest that hierarchical modular brain networks are particularly suited to facilitate local (segregated) neuronal operations and the global integration of segregated functions. Although functional networks are constrained by structural connections, context-sensitive integration during cognition tasks necessarily entails a divergence between structural and functional networks. This degenerate (many-to-one) function-structure mapping is crucial for understanding the nature of brain networks. The emergence of dynamic functional networks from static structural connections calls for a formal (computational) approach to neuronal information processing that may resolve this dialectic between structure and function.

Matthew Brookes,  Thomas R E Barnes,  Mark Woolrich … (2011)
In recent years the study of resting state brain networks (RSNs) has become an important area of neuroimaging. The majority of studies have used functional magnetic resonance imaging (fMRI) to measure temporal correlation between blood-oxygenation-level-dependent (BOLD) signals from different brain areas. However, BOLD is an indirect measure related to hemodynamics, and the electrophysiological basis of connectivity between spatially separate network nodes cannot be comprehensively assessed using this technique. In this paper we describe a means to characterize resting state brain networks independently using magnetoencephalography (MEG), a neuroimaging modality that bypasses the hemodynamic response and measures the magnetic fields associated with electrophysiological brain activity. The MEG data are analyzed using a unique combination of beamformer spatial filtering and independent component analysis (ICA) and require no prior assumptions about the spatial locations or patterns of the networks. This method results in RSNs with significant similarity in their spatial structure compared with RSNs derived independently using fMRI. This outcome confirms the neural basis of hemodynamic networks and demonstrates the potential of MEG as a tool for understanding the mechanisms that underlie RSNs and the nature of connectivity that binds network nodes.

Specialty section: This article was submitted to Neurotrauma, a section of the journal Frontiers in Neurology