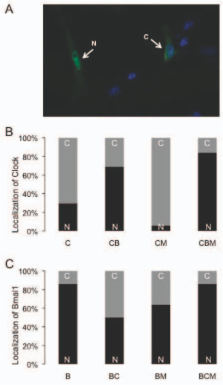 The Magel2 gene is most highly expressed in the suprachiasmatic nucleus of the hypothalamus, where its expression cycles in a circadian pattern comparable to that of clock-controlled genes. Mice lacking the Magel2 gene have hypothalamic dysfunction, including circadian defects that include reduced and fragmented total activity, excessive activity during the subjective day, but they have a normal circadian period. Magel2 is a member of the MAGE family of proteins that have various roles in cellular function, but the specific function of Magel2 is unknown.

We used a variety of cell-based assays to determine whether Magel2 modifies the properties of core circadian rhythm proteins.

Magel2 represses the activity of the Clock:Bmal1 heterodimer in a Per2-luciferase assay. Magel2 interacts with Bmal1 and with Per2 as measured by co-immunoprecipitation in co-transfected cells, and exhibits a subcellular distribution consistent with these interactions when visualized by immunofluorescence. As well, Magel2 induces the redistribution of the subcellular localization of Clock towards the cytoplasm, in contrast to the nucleus-directed effect of Bmal1 on Clock subcellular localization.

Coordinated transcription of key pathways in the mouse by the circadian clock.

Satchidananda Panda, Marina P. Antoch, Brooke H. Miller … (2002)
In mammals, circadian control of physiology and behavior is driven by a master pacemaker located in the suprachiasmatic nuclei (SCN) of the hypothalamus. We have used gene expression profiling to identify cycling transcripts in the SCN and in the liver. Our analysis revealed approximately 650 cycling transcripts and showed that the majority of these were specific to either the SCN or the liver. Genetic and genomic analysis suggests that a relatively small number of output genes are directly regulated by core oscillator components. Major processes regulated by the SCN and liver were found to be under circadian regulation. Importantly, rate-limiting steps in these various pathways were key sites of circadian control, highlighting the fundamental role that circadian clocks play in cellular and organismal physiology.

Caroline Ko, Joseph S Takahashi (2006)
Circadian rhythms are approximately 24-h oscillations in behavior and physiology, which are internally generated and function to anticipate the environmental changes associated with the solar day. A conserved transcriptional-translational autoregulatory loop generates molecular oscillations of 'clock genes' at the cellular level. In mammals, the circadian system is organized in a hierarchical manner, in which a master pacemaker in the suprachiasmatic nucleus (SCN) regulates downstream oscillators in peripheral tissues. Recent findings have revealed that the clock is cell-autonomous and self-sustained not only in a central pacemaker, the SCN, but also in peripheral tissues and in dissociated cultured cells. It is becoming evident that specific contribution of each clock component and interactions among the components vary in a tissue-specific manner. Here, we review the general mechanisms of the circadian clockwork, describe recent findings that elucidate tissue-specific expression patterns of the clock genes and address the importance of circadian regulation in peripheral tissues for an organism's overall well-being.

The genetics of mammalian circadian order and disorder: implications for physiology and disease.

Joseph S Takahashi, Hee-Kyung Hong, Caroline Ko … (2008)
Circadian cycles affect a variety of physiological processes, and disruptions of normal circadian biology therefore have the potential to influence a range of disease-related pathways. The genetic basis of circadian rhythms is well studied in model organisms and, more recently, studies of the genetic basis of circadian disorders has confirmed the conservation of key players in circadian biology from invertebrates to humans. In addition, important advances have been made in understanding how these molecules influence physiological functions in tissues throughout the body. Together, these studies set the scene for applying our knowledge of circadian biology to the understanding and treatment of a range of human diseases, including cancer and metabolic and behavioural disorders.