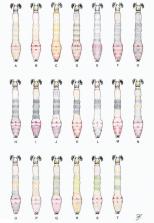 Females and males reared from pupae, their pupal exuviae and cocoons, and mature larvae of the Simulium ( Gomphostilbia) asakoae species group from various localities in Thailand were morphologically examined. A total of 25 species was identified, including two of four known species ( Simulium asakoae Takaoka & Davies and S. chiangdaoense Takaoka & Srisuka), one newly confirmed species ( S. myanmarense Takaoka, Srisuka & Saeung, originally described from Myanmar), one newly transferred species ( S. inthanonense Takaoka & Suzuki formerly of the S. ceylonicum species group), and 21 new species. Descriptions of all 21 new species are given, and the first full description of the male of S. inthanonense , together with the revised descriptions of its female, pupa, and larva, is also provided. Keys to identify all 27 members of this species group from Thailand are given for females, males, pupae, and larvae. The genetic relationships of all but one species were resolved using COI gene sequence-based analysis. All 26 species were divided into nine subgroups, I–IX, each consisting of two, one, four, nine, one, three, two, one and three species, respectively.

A multi-locus approach resolves the phylogenetic relationships of the Simulium asakoae and Simulium ceylonicum species groups in Malaysia: evidence for distinct evolutionary lineages.

V L Low,  H. Takaoka,  P. H. Adler … (2015)
A multi-locus approach was used to examine the DNA sequences of 10 nominal species of blackfly in the Simulium subgenus Gomphostilbia (Diptera: Simuliidae) in Malaysia. Molecular data were acquired from partial DNA sequences of the mitochondria-encoded cytochrome c oxidase subunit I (COI), 12S rRNA and 16S rRNA genes, and the nuclear-encoded 18S rRNA and 28S rRNA genes. No single gene, nor the concatenated gene set, resolved all species or all relationships. However, all morphologically established species were supported by at least one gene. The multi-locus sequence analysis revealed two distinct evolutionary lineages, conforming to the morphotaxonomically recognized Simulium asakoae and Simulium ceylonicum species groups.

The blackflies (Diptera : Simuliidae) from Thailand