Risk of Tuberculosis Infection and Disease for Health Care Workers: An Updated Meta-Analysis 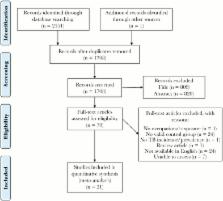 Tuberculosis (TB) remains a major challenge to global health. Healthcare workers (HCWs) appear to be at increased risk of TB compared with the general population, despite efforts to scale up infection control and reduce nosocomial TB transmission. This review aims to provide an updated estimate of the occupational risk of latent TB infection (LTBI) and active TB among HCWs compared with the general population.

A systematic review was performed to identify studies published over the last 10 years reporting TB prevalence or incidence among HCWs and a control group. Pooled effect estimates were calculated to determine the risk of infection.

The overall risk of both LTBI and TB to HCWs continues to be significantly higher than that of the general population, consistent with previous findings. This study highlights the continuing need for improvements in infection control and HCW screening programs.

Tuberculosis among Health-Care Workers in Low- and Middle-Income Countries: A Systematic Review

Risk of tuberculosis infection and disease associated with work in health care settings.

D. Menzies, R. Joshi, M. Pai (2007)
Tuberculosis (TB) in health care workers (HCWs) was not considered a serious problem following the advent of effective antibiotic therapy. Interest was re-stimulated by the occurrence of several major nosocomial outbreaks. We have reviewed the available published literature regarding prevalence and incidence of TB infection and disease among HCWs in countries categorised by mean income. We included studies published in English since 1960 from low- and middle-income countries (LMICs) and since 1990 from high-income countries (HICs). We excluded outbreak reports and studies based only on questionnaires. The median prevalence of latent TB infection (LTBI) in HCWs was 63% (range 33-79%) in LMICs and 24% in HICs (4-46%). Among HCWs from LMICs, LTBI was consistently associated with markers of occupational exposure, but in HICs it was more often associated with non-occupational factors. The median annual incidence of TB infection attributable to health care work was 5.8% (range 0-11%) in LMICs and 1.1% (0.2-12%) in HICs. Rates of active TB in HCWs were consistently higher than in the general population in all countries, although findings were variable in HICs. Administrative infection control measures had a modest impact in LMICs, yet seemed the most effective in HICs. TB remains a very important occupational risk for HCWs in LMICs and for workers in some institutions in HICs. Risk appears particularly high when there is increased exposure combined with inadequate infection control measures.

This is an Open Access article distributed under the terms of the Creative Commons Attribution-NonCommercial-NoDerivs licence ( http://creativecommons.org/licenses/by-nc-nd/4.0/), which permits non-commercial reproduction and distribution of the work, in any medium, provided the original work is not altered or transformed in any way, and that the work is properly cited. For commercial re-use, please contact journals.permissions@oup.com.