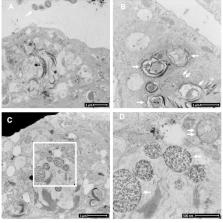 COPD is an inflammatory airway pathology associated with recurrent infection by nontypeable Haemophilus influenzae (NTHi) that is not effectively managed by macrolide antibiotic therapy. We hypothesised that NTHi is able to reside intracellularly within COPD-derived airway epithelial cells (AEC), and that the factors contained in cigarette smoke when coupled with exposure to erythromycin or azithromycin arrest autophagy, the principle mechanism responsible for clearing intracellular bacteria (called “xenophagy”).

AEC treated with macrolide antibiotics or 10% CSE exhibited a block in autophagic flux as evidenced by a concomitant increase in LC3-II and Sequestosome abundance (vs control; both P < 0.01). While control AEC showed no clear evidence of intracellular NTHi, COPD-derived cultures exhibited abundant NTHi within the cytoplasm. Further, intracellular NTHi that were encapsulated within vesicles propagated from the apical epithelial layer to the basal cell layer.

Taken together, our findings indicate that COPD, cigarette smoke and macrolide antibiotics potentiate the susceptibility to persistent intracellular NTHi. A major mechanism for this is arresting normal autophagic flux in airway epithelial cells. Hence, structural modifications that mitigate this off-target effect of macrolides have significant potential to clear intracellular NTHi and thereby reduce the influence of this pathogen in the airways afflicted by COPD.

Peter Barnes,  Peter Burney,  Edwin K Silverman … (2015)
Chronic obstructive pulmonary disease (COPD) is a common disease with high global morbidity and mortality. COPD is characterized by poorly reversible airway obstruction, which is confirmed by spirometry, and includes obstruction of the small airways (chronic obstructive bronchiolitis) and emphysema, which lead to air trapping and shortness of breath in response to physical exertion. The most common risk factor for the development of COPD is cigarette smoking, but other environmental factors, such as exposure to indoor air pollutants - especially in developing countries - might influence COPD risk. Not all smokers develop COPD and the reasons for disease susceptibility in these individuals have not been fully elucidated. Although the mechanisms underlying COPD remain poorly understood, the disease is associated with chronic inflammation that is usually corticosteroid resistant. In addition, COPD involves accelerated ageing of the lungs and an abnormal repair mechanism that might be driven by oxidative stress. Acute exacerbations, which are mainly triggered by viral or bacterial infections, are important as they are linked to a poor prognosis. The mainstay of the management of stable disease is the use of inhaled long-acting bronchodilators, whereas corticosteroids are beneficial primarily in patients who have coexisting features of asthma, such as eosinophilic inflammation and more reversibility of airway obstruction. Apart from smoking cessation, no treatments reduce disease progression. More research is needed to better understand disease mechanisms and to develop new treatments that reduce disease activity and progression.

Kyle Bauckman,  Nana Owusu-Boaitey,  Indira Mysorekar (2015)
Xenophagy is an autophagic phenomenon that specifically involves pathogens and other non-host entities. Although the understanding of the relationship between autophagosomes and invading organisms has grown significantly in the past decade, the exact steps to confirm xenophagy has been not been thoroughly defined. Here we describe a methodical approach to confirming autophagy, its interaction with bacterial invasion, as well as the specific type of autophagic formation (i.e. autophagosome, autolysosome, phagolysosome). Further, we argue that xenophagy is not limited to pathogen interaction with autophagosome, but also non-microbial entities such as iron.