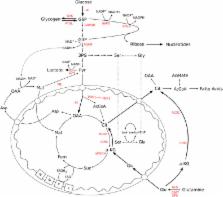 Low oxygen tension (hypoxia) is a pervasive physiological and pathophysiological stimulus that metazoan organisms have contended with since they evolved from their single-celled ancestors. The effect of hypoxia on a tissue can be either positive or negative, depending on the severity, duration and context. Over the long-term, hypoxia is not usually consistent with normal function and so multicellular organisms have had to evolve both systemic and cellular responses to hypoxia. Our reliance on oxygen for efficient adenosine triphosphate (ATP) generation has meant that the cellular metabolic network is particularly sensitive to alterations in oxygen tension. Metabolic changes in response to hypoxia are elicited through both direct mechanisms, such as the reduction in ATP generation by oxidative phosphorylation or inhibition of fatty-acid desaturation, and indirect mechanisms including changes in isozyme expression through hypoxia-responsive transcription factor activity. Significant regions of cancers often grow in hypoxic conditions owing to the lack of a functional vasculature. As hypoxic tumour areas contain some of the most malignant cells, it is important that we understand the role metabolism has in keeping these cells alive. This review will outline our current understanding of many of the hypoxia-induced changes in cancer cell metabolism, how they are affected by other genetic defects often present in cancers, and how these metabolic alterations support the malignant hypoxic phenotype.

Hypoxia in cancer: significance and impact on clinical outcome.

Arnulf Mayer,  Peter Vaupel (2007)
Hypoxia, a characteristic feature of locally advanced solid tumors, has emerged as a pivotal factor of the tumor (patho-)physiome since it can promote tumor progression and resistance to therapy. Hypoxia represents a "Janus face" in tumor biology because (a) it is associated with restrained proliferation, differentiation, necrosis or apoptosis, and (b) it can also lead to the development of an aggressive phenotype. Independent of standard prognostic factors, such as tumor stage and nodal status, hypoxia has been suggested as an adverse prognostic factor for patient outcome. Studies of tumor hypoxia involving the direct assessment of the oxygenation status have suggested worse disease-free survival for patients with hypoxic cervical cancers or soft tissue sarcomas. In head & neck cancers the studies suggest that hypoxia is prognostic for survival and local control. Technical limitations of the direct O(2) sensing technique have prompted the use of surrogate markers for tumor hypoxia, such as hypoxia-related endogenous proteins (e.g., HIF-1alpha, GLUT-1, CA IX) or exogenous bioreductive drugs. In many - albeit not in all - studies endogenous markers showed prognostic significance for patient outcome. The prognostic relevance of exogenous markers, however, appears to be limited. Noninvasive assessment of hypoxia using imaging techniques can be achieved with PET or SPECT detection of radiolabeled tracers or with MRI techniques (e.g., BOLD). Clinical experience with these methods regarding patient prognosis is so far only limited. In the clinical studies performed up until now, the lack of standardized treatment protocols, inconsistencies of the endpoints characterizing the oxygenation status and methodological differences (e.g., different immunohistochemical staining procedures) may compromise the power of the prognostic parameter used.

TIGAR, a p53-Inducible Regulator of Glycolysis and Apoptosis

Karim Bensaad,  Atsushi Tsuruta,  Mary A. Selak … (2006)
The p53 tumor-suppressor protein prevents cancer development through various mechanisms, including the induction of cell-cycle arrest, apoptosis, and the maintenance of genome stability. We have identified a p53-inducible gene named TIGAR (TP53-induced glycolysis and apoptosis regulator). TIGAR expression lowered fructose-2,6-bisphosphate levels in cells, resulting in an inhibition of glycolysis and an overall decrease in intracellular reactive oxygen species (ROS) levels. These functions of TIGAR correlated with an ability to protect cells from ROS-associated apoptosis, and consequently, knockdown of endogenous TIGAR expression sensitized cells to p53-induced death. Expression of TIGAR may therefore modulate the apoptotic response to p53, allowing survival in the face of mild or transient stress signals that may be reversed or repaired. The decrease of intracellular ROS levels in response to TIGAR may also play a role in the ability of p53 to protect from the accumulation of genomic damage.

Satoaki Matoba,  Ju-Gyeong Kang,  Willmar Patino … (2006)
The energy that sustains cancer cells is derived preferentially from glycolysis. This metabolic change, the Warburg effect, was one of the first alterations in cancer cells recognized as conferring a survival advantage. Here, we show that p53, one of the most frequently mutated genes in cancers, modulates the balance between the utilization of respiratory and glycolytic pathways. We identify Synthesis of Cytochrome c Oxidase 2 (SCO2) as the downstream mediator of this effect in mice and human cancer cell lines. SCO2 is critical for regulating the cytochrome c oxidase (COX) complex, the major site of oxygen utilization in the eukaryotic cell. Disruption of the SCO2 gene in human cancer cells with wild-type p53 recapitulated the metabolic switch toward glycolysis that is exhibited by p53-deficient cells. That SCO2 couples p53 to mitochondrial respiration provides a possible explanation for the Warburg effect and offers new clues as to how p53 might affect aging and metabolism.

Oncogenesis is an open-access journal published by Nature Publishing Group. This work is licensed under a Creative Commons Attribution 4.0 International License. The images or other third party material in this article are included in the article's Creative Commons license, unless indicated otherwise in the credit line; if the material is not included under the Creative Commons license, users will need to obtain permission from the license holder to reproduce the material. To view a copy of this license, visit http://creativecommons.org/licenses/by/4.0/