Role of m6A in osteoporosis, arthritis and osteosarcoma (Review) 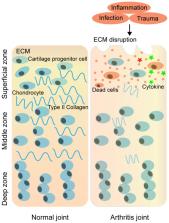 RNA modification is a type of post-transcriptional modification that regulates important cellular pathways, such as the processing and metabolism of RNA. The most abundant form of methylation modification is RNA N6-methyladenine (m6A), which plays various post-transcriptional regulatory roles in cellular biological functions, including cell differentiation, embryonic development and disease occurrence. Bones play a pivotal role in the skeletal system as they support and protect muscles and other organs, facilitate movement and ensure haematopoiesis. The development and remodelling of bones require a delicate and accurate regulation of gene expression by epigenetic mechanisms that involve modifications of histone, DNA and RNA. The present review discusses the enzymes and proteins involved in mRNA m6A methylation modification and summarises current research progress and the mechanisms of mRNA m6A methylation in common orthopaedic diseases, including osteoporosis, arthritis and osteosarcoma.

Patricia A. McNeill,  L McNeill,  Vladimir Saudek … (2007)
Variants in the FTO (fat mass and obesity associated) gene are associated with increased body mass index in humans. Here, we show by bioinformatics analysis that FTO shares sequence motifs with Fe(II)- and 2-oxoglutarate-dependent oxygenases. We find that recombinant murine Fto catalyzes the Fe(II)- and 2OG-dependent demethylation of 3-methylthymine in single-stranded DNA, with concomitant production of succinate, formaldehyde, and carbon dioxide. Consistent with a potential role in nucleic acid demethylation, Fto localizes to the nucleus in transfected cells. Studies of wild-type mice indicate that Fto messenger RNA (mRNA) is most abundant in the brain, particularly in hypothalamic nuclei governing energy balance, and that Fto mRNA levels in the arcuate nucleus are regulated by feeding and fasting. Studies can now be directed toward determining the physiologically relevant FTO substrate and how nucleic acid methylation status is linked to increased fat mass.

Topology of the human and mouse m6A RNA methylomes revealed by m6A-seq.

Dan Dominissini,  Sharon Moshitch-Moshkovitz,  Schraga Schwartz … (2012)
An extensive repertoire of modifications is known to underlie the versatile coding, structural and catalytic functions of RNA, but it remains largely uncharted territory. Although biochemical studies indicate that N(6)-methyladenosine (m(6)A) is the most prevalent internal modification in messenger RNA, an in-depth study of its distribution and functions has been impeded by a lack of robust analytical methods. Here we present the human and mouse m(6)A modification landscape in a transcriptome-wide manner, using a novel approach, m(6)A-seq, based on antibody-mediated capture and massively parallel sequencing. We identify over 12,000 m(6)A sites characterized by a typical consensus in the transcripts of more than 7,000 human genes. Sites preferentially appear in two distinct landmarks--around stop codons and within long internal exons--and are highly conserved between human and mouse. Although most sites are well preserved across normal and cancerous tissues and in response to various stimuli, a subset of stimulus-dependent, dynamically modulated sites is identified. Silencing the m(6)A methyltransferase significantly affects gene expression and alternative splicing patterns, resulting in modulation of the p53 (also known as TP53) signalling pathway and apoptosis. Our findings therefore suggest that RNA decoration by m(6)A has a fundamental role in regulation of gene expression.

Xiao Wang,  Zhike Lu,  Adrián Gómez-Brandón … (2013)
N6 -methyladenosine (m6A) is the most prevalent internal (non-cap) modification present in the messenger RNA (mRNA) of all higher eukaryotes 1,2 . Although essential to cell viability and development 3–5 , the exact role of m6A modification remains to be determined. The recent discovery of two m6A demethylases in mammalian cells highlighted the importance of m6A in basic biological functions and disease 6–8 . Here we show that m6A is selectively recognized by the human YTH domain family 2 (YTHDF2) protein to regulate mRNA degradation. We identified over 3,000 cellular RNA targets of YTHDF2, most of which are mRNAs, but which also include non-coding RNAs, with a conserved core motif of G(m6A)C. We further establish the role of YTHDF2 in RNA metabolism, showing that binding of YTHDF2 results in the localization of bound mRNA from the translatable pool to mRNA decay sites, such as processing bodies 9 . The C-terminal domain of YTHDF2 selectively binds to m6A-containing mRNA whereas the N-terminal domain is responsible for the localization of the YTHDF2-mRNA complex to cellular RNA decay sites. Our results indicate that the dynamic m6A modification is recognized by selective-binding proteins to affect the translation status and lifetime of mRNA.

Funding: No funding was received.