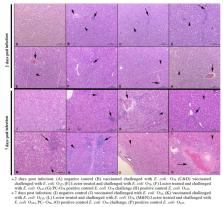 In this study, the protective efficacy of an E. coli live attenuated vaccine was compared to the preventive administration of lectin preparation before the challenge. Two hundred broiler chicks were divided into eight equal groups. The first group was used as a negative control group. Three groups were vaccinated at day 1 with the avian colibacillosis live vaccine of which one group served as a vaccinated nonchallenged group. Another two groups were treated with lectin product (0.5 mL/L drinking water) for three days before the challenge. The last two groups served as challenge control for either E. coli O 78 or O 125 strains. The challenge was conducted at three weeks of age with either homologous O 78 or heterologous O 125 E. coli strains, using 0.5 mL/bird of each avian pathogenic E. coli (APEC) strain (~10 8 colony forming units “CFU”/mL)/subcutaneously. The bodyweight and feed conversion ratios (FCR) were calculated for four weeks. Clinical signs and gross and histopathological lesions were scored at two and seven days post inoculation (dpi). The heart and liver of euthanized chickens at 2 dpi were removed aseptically and homogenized to evaluate pathogenic E. coli colonization. Results showed that live avian colibacillosis vaccine reduced mortalities and APEC colonization in the homologous challenge group but not in the heterologous challenge group. Lectin-treated groups showed 20% and 16% mortality after challenge with E. coli O 78 and O 125, respectively, and both groups showed performance parameters, clinical signs, and histopathological lesion scores comparable to the negative control group, with variable E. coli colonization of heart and liver. The study demonstrated the efficacy of live attenuated avian colibacillosis vaccine against homologous but not heterologous APEC challenge in broiler chickens. The lectin-containing products can be used as a preventive medication to reduce the clinical impacts of colibacillosis regardless of the challenge strain. Standardization of the evaluation parameters for APEC vaccines is recommended.

Eric Oswald,  Jacques G Mainil,  Brigitte Schaeffer … (2012)
In order to improve the identification of avian pathogenic Escherichia coli (APEC) strains, an extensive characterization of 1,491 E. coli isolates was conducted, based on serotyping, virulence genotyping, and experimental pathogenicity for chickens. The isolates originated from lesions of avian colibacillosis (n = 1,307) or from the intestines of healthy animals (n = 184) from France, Spain, and Belgium. A subset (460 isolates) of this collection was defined according to their virulence for chicks. Six serogroups (O1, O2, O5, O8, O18, and O78) accounted for 56.5% of the APEC isolates and 22.5% of the nonpathogenic isolates. Thirteen virulence genes were more frequently present in APEC isolates than in nonpathogenic isolates but, individually, none of them could allow the identification of an isolate as an APEC strain. In order to take into account the diversity of APEC strains, a statistical analysis based on a tree-modeling method was therefore conducted on the sample of 460 pathogenic and nonpathogenic isolates. This resulted in the identification of four different associations of virulence genes that enables the identification of 70.2% of the pathogenic strains. Pathogenic strains were identified with an error margin of 4.3%. The reliability of the link between these four virulence patterns and pathogenicity for chickens was validated on a sample of 395 E. coli isolates from the collection. The genotyping method described here allowed the identification of more APEC isolates with greater reliability than the classical serotyping methods currently used in veterinary laboratories.

H. Abdallah,  E. A. Reuland,  B. Wintermans … (2015)
Objectives The aim of the present study was to determine the prevalence and to characterize extended-spectrum β-lactamases- and/or carbapenemases-producing Enterobacteriaceae among Enterobacteriaceae isolated from retail chicken meat in Zagazig, Egypt. Methods One hundred and six Enterobacteriaceae isolates were collected from retail chicken meat samples purchased in Zagazig, Egypt in 2013. Species identification was done by MALDI-TOF MS. Screening for ESBL-E was performed by inoculation of isolates recovered from meat samples onto the EbSA (Cepheid Benelux, Apeldoorn, the Netherlands) selective screening agar. ESBL production was confirmed by combination disc diffusion test with clavulanic acid (Rosco, Taastrup, Denmark). Carbapenemases production was confirmed with double disk synergy tests. Resistance genes were characterized by PCR with specific primers for TEM, SHV, and CTX-M and carbapenemases (KPC, NDM, OXA-48, IMP and VIM). PCR products of CTX-M genes were purified and sequenced. Phylogenetic grouping of E. coli was performed by a PCR-based method. Results Of these 106 isolates 69 (65.09%) were ESBL producers. Twelve (11.32%) of these isolates were also phenotypically class B carbapenemases producer. TEM genes were detected in 61 (57.55%) isolates. 49 (46.23%) isolates harbored CTX-M genes, and 25 (23.58%) carried genes of the SHV family. All CPE belonged to the NDM group. The predominant CTX-M sequence type was CTX-M-15 (89.80%). The majority (80%) of the ESBL-EC belonged to low virulence phylogroups A and B1. Conclusions This is the first study from Egypt reporting high rates of ESBLs and carbapenemases (65.09% and 11.32%, respectively) in Enterobacteriaceae isolated from retail chicken meat. These results raise serious concerns about public health and food safety as retail meat could serve as a reservoir for these resistant bacteria which could be transferred to humans through the food chain.

Marwan Abdelhamid Abu-Madi,  Haitham Ghunaim,  Subhashinie Kariyawasam (2014)
Avian pathogenic Escherichia coli (APEC) is one of the most economically devastating pathogens affecting the poultry industry. This group of extra-intestinal E. coli causes a variety of clinical conditions including airsacculitis and cellulitis. The economic impact of APEC is mainly due to mortality, slower growth rates, and carcass downgrading. In commercial broiler operations, APEC infections are controlled indirectly by vaccination against other respiratory diseases and minimizing stress conditions, and directly by administration of antimicrobial agents to suppress the infection in already infected flocks. The fact that most APEC strains possess some common virulence factors suggests that an effective vaccine against APEC is a viable option. The most important virulence factors that have been investigated over the years include type I and P fimbriae, aerobactin iron-acquisition system, and serum resistance traits. Despite the potential for developing an efficacious vaccine to combat this economically important poultry disease, several obstacles hinder such efforts. Those obstacles include the cost, vaccine delivery method and timing of vaccination as the birds should be immune to APEC by 21 days of age. Herein, we review the various attempts to develop an effective vaccine against the respiratory form of APEC diseases in poultry. We also discuss in-depth the potentials and limitations of such vaccines.

Soad A. Nasef sadly passed away on February 2020.