Calypso: a user-friendly web-server for mining and visualizing microbiome–environment interactions 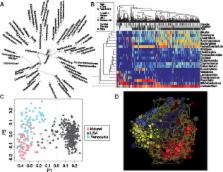 Availability and Implementation: The web-interface is accessible via http://cgenome.net/calypso/. The software is programmed in Java, PERL and R and the source code is available from Zenodo ( https://zenodo.org/record/50931). The software is freely available for non-commercial users.

ShotgunFunctionalizeR: an R-package for functional comparison of metagenomes.

Philip Hugenholtz,  Erik Kristiansson,  Daniel Dalevi (2009)
Microorganisms are ubiquitous in nature and constitute intrinsic parts of almost every ecosystem. A culture-independent and powerful way to study microbial communities is metagenomics. In such studies, functional analysis is performed on fragmented genetic material from multiple species in the community. The recent advances in high-throughput sequencing have greatly increased the amount of data in metagenomic projects. At present, there is an urgent need for efficient statistical tools to analyse these data. We have created ShotgunFunctionalizeR, an R-package for functional comparison of metagenomes. The package contains tools for importing, annotating and visualizing metagenomic data produced by shotgun high-throughput sequencing. ShotgunFunctionalizeR contains several statistical procedures for assessing functional differences between samples, both for individual genes and for entire pathways. In addition to standard and previously published methods, we have developed and implemented a novel approach based on a Poisson model. This procedure is highly flexible and thus applicable to a wide range of different experimental designs. We demonstrate the potential of ShotgunFunctionalizeR by performing a regression analysis on metagenomes sampled at multiple depths in the Pacific Ocean. http://shotgun.zool.gu.se

Impact of Experimental Hookworm Infection on the Human Gut Microbiota

Cinzia Cantacessi,  Paul Giacomin,  John Croese … (2014)
The interactions between gastrointestinal parasitic helminths and commensal bacteria are likely to play a pivotal role in the establishment of host-parasite cross-talk, ultimately shaping the development of the intestinal immune system. However, little information is available on the impact of infections by gastrointestinal helminths on the bacterial communities inhabiting the human gut. We used 16S rRNA gene amplification and pyrosequencing to characterize, for the first time to our knowledge, the differences in composition and relative abundance of fecal microbial communities in human subjects prior to and following experimental infection with the blood-feeding intestinal hookworm, Necator americanus. Our data show that, although hookworm infection leads to a minor increase in microbial species richness, no detectable effect is observed on community structure, diversity or relative abundance of individual bacterial species.

[* ]To whom correspondence should be addressed.