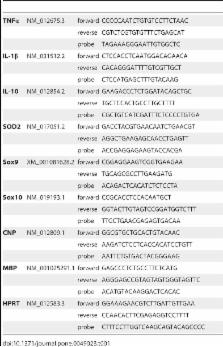 Intrauterine infection and inflammation are major reasons for preterm birth. The switch from placenta-mediated to lung-mediated oxygen supply during birth is associated with a sudden rise of tissue oxygen tension that amounts to relative hyperoxia in preterm infants. Both infection/inflammation and hyperoxia have been shown to be involved in brain injury of preterm infants. Hypothesizing that they might be additive or synergistic, we investigated the influence of a systemic lipopolysaccharide (LPS) application on hyperoxia-induced white matter damage (WMD) in newborn rats. Three-day-old Wistar rat pups received 0.25 mg/kg LPS i.p. and were subjected to 80% oxygen on P6 for 24 h. The extent of WMD was assessed by immunohistochemistry, western blots, and diffusion tensor (DT) magnetic resonance imaging (MRI). In addition, the effects of LPS and hyperoxia were studied in an in vitro co-culture system of primary rat oligodendrocytes and microglia cells. Both noxious stimuli, hyperoxia, and LPS caused hypomyelination as revealed by western blot, immunohistochemistry, and altered WM microstructure on DT-MRI. Even so, cellular changes resulting in hypomyelination seem to be different. While hyperoxia induces cell death, LPS induces oligodendrocyte maturity arrest without cell death as revealed by TUNEL-staining and immunohistological maturation analysis. In the two-hit scenario cell death is reduced compared with hyperoxia treated animals, nevertheless white matter alterations persist. Concordantly with these in vivo findings we demonstrate that LPS pre-incubation reduced premyelinating-oligodendrocyte susceptibility towards hyperoxia in vitro. This protective effect might be caused by upregulation of interleukin-10 and superoxide dismutase expression after LPS stimulation. Reduced expression of transcription factors controlling oligodendrocyte development and maturation further indicates oligodendrocyte maturity arrest. The knowledge about mechanisms that triggered hypomyelination contributes to a better understanding of WMD in premature born infants.

Activation of innate immunity in the CNS triggers neurodegeneration through a Toll-like receptor 4-dependent pathway.

Seija Lehnardt, Leon Massillon, Pamela Follett … (2003)
Innate immunity is an evolutionarily ancient system that provides organisms with immediately available defense mechanisms through recognition of pathogen-associated molecular patterns. We show that in the CNS, specific activation of innate immunity through a Toll-like receptor 4 (TLR4)-dependent pathway leads to neurodegeneration. We identify microglia as the major lipopolysaccharide (LPS)-responsive cell in the CNS. TLR4 activation leads to extensive neuronal death in vitro that depends on the presence of microglia. LPS leads to dramatic neuronal loss in cultures prepared from wild-type mice but does not induce neuronal injury in CNS cultures derived from tlr4 mutant mice. In an in vivo model of neurodegeneration, stimulating the innate immune response with LPS converts a subthreshold hypoxic-ischemic insult from no discernable neuronal injury to severe axonal and neuronal loss. In contrast, animals bearing a loss-of-function mutation in the tlr4 gene are resistant to neuronal injury in the same model. The present study demonstrates a mechanistic link among innate immunity, TLRs, and neurodegeneration.

Stephen Back, Ning Ling Luo, Natalya S. Borenstein … (2001)
Hypoxic-ischemic injury to the periventricular cerebral white matter [periventricular leukomalacia (PVL)] results in cerebral palsy and is the leading cause of brain injury in premature infants. The principal feature of PVL is a chronic disturbance of myelination and suggests that oligodendrocyte (OL) lineage progression is disrupted by ischemic injury. We determined the OL lineage stages at risk for injury during the developmental window of vulnerability for PVL (23-32 weeks, postconceptional age). In 26 normal control autopsy human brains, OL lineage progression was defined in parietal white matter, a region of predilection for PVL. Three successive OL stages, the late OL progenitor, the immature OL, and the mature OL, were characterized between 18 and 41 weeks with anti-NG2 proteoglycan, O4, O1, and anti-myelin basic protein (anti-MBP) antibodies. NG2+O4+ late OL progenitors were the predominant stage throughout the latter half of gestation. Between 18 and 27 weeks, O4+O1+ immature OLs were a minor population (9.9 +/- 2.1% of total OLs; n = 9). Between 28 and 41 weeks, an increase in immature OLs to 30.9 +/- 2.1% of total OLs (n = 9) was accompanied by a progressive increase in MBP+ myelin sheaths that were restricted to the periventricular white matter. The developmental window of high risk for PVL thus precedes the onset of myelination and identifies the late OL progenitor as the major potential target. Moreover, the decline in incidence of PVL at approximately 32 weeks coincides with the onset of myelination in the periventricular white matter and suggests that the risk for PVL is related to the presence of late OL progenitors in the periventricular white matter.

Effects of prenatal infection on brain development and behavior: a review of findings from animal models.

Patricia Boksa (2010)
Epidemiological studies with human populations indicate associations between maternal infection during pregnancy and increased risk in offspring for central nervous system (CNS) disorders including schizophrenia, autism and cerebral palsy. Since 2000, a large number of studies have used rodent models of systemic prenatal infection or prenatal immune activation to characterize changes in brain function and behavior caused by the prenatal insult. This review provides a comprehensive summary of these findings, and examines consistencies and trends across studies in an effort to provide a perspective on our current state of understanding from this body of work. Results from these animal modeling studies clearly indicate that prenatal immune activation can cause both acute and lasting changes in behavior and CNS structure and function in offspring. Across laboratories, studies vary with respect to the type, dose and timing of immunogen administration during gestation, species used, postnatal age examined and specific outcome measure quantified. This makes comparison across studies and assessment of replicability difficult. With regard to mechanisms, evidence for roles for several acute mediators of effects of prenatal immune activation has emerged, including circulating interleukin-6, increased placental cytokines and oxidative stress in the fetal brain. However, information required to describe the complete mechanistic pathway responsible for acute effects of prenatal immune activation on fetal brain is lacking, and no studies have yet addressed the issue of how acute prenatal exposure to an immunogen is transduced into a long-term CNS change in the postnatal animal. Directions for further research are discussed. Copyright 2010 Elsevier Inc. All rights reserved.

This work was supported by grants from the Metzler-Stiftung, Frankfurt, Germany, the European Commission (Sixth Framework Program, LSHM-CT-2006-036534), the Swiss National Fund N° 31003A-112233, the Centre d'Imagerie Biomédicale, of the UNIL (L'Université de Lausanne), UNIGE (University of Geneva), HUG (Geneva University Hospitals), CHUV (Centre hospitalier universitaire vaudois) and EPFL (École Polytechnique Fédérale de Lausanne) and the Leenards and Jeantet foundations. The funders had no role in study design, data collection and analysis, decision to publish, or preparation of the manuscript.