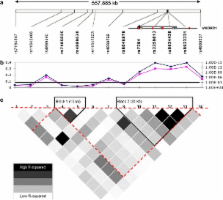 We report an extensive study of variability in genes encoding proteins that are believed to be involved in the action and biotransformation of warfarin. Warfarin is a commonly prescribed anticoagulant that is difficult to use because of the wide interindividual variation in dose requirements, the narrow therapeutic range and the risk of serious bleeding. We genotyped 201 patients for polymorphisms in 29 genes in the warfarin interactive pathways and tested them for association with dose requirement. In our study, polymorphisms in or flanking the genes VKORC1, CYP2C9, CYP2C18, CYP2C19, PROC, APOE, EPHX1, CALU, GGCX and ORM1-ORM2 and haplotypes of VKORC1, CYP2C9, CYP2C8, CYP2C19, PROC, F7, GGCX, PROZ, F9, NR1I2 and ORM1- ORM2 were associated with dose ( P < 0.05). VKORC1, CYP2C9, CYP2C18 and CYP2C19 were significant after experiment-wise correction for multiple testing ( P < 0.000175), however, the association of CYP2C18 and CYP2C19 was fully explained by linkage disequilibrium with CYP2C9*2 and/or *3. PROC and APOE were both significantly associated with dose after correction within each gene. A multiple regression model with VKORC1, CYP2C9, PROC and the non-genetic predictors age, bodyweight, drug interactions and indication for treatment jointly accounted for 62% of variance in warfarin dose. Weaker associations observed for other genes could explain up to ∼10% additional dose variance, but require testing and validation in an independent and larger data set. Translation of this knowledge into clinical guidelines for warfarin prescription will be likely to have a major impact on the safety and efficacy of warfarin.

Adam J. Pritchard,  M Przeworski (2001)
In this review, we describe recent empirical and theoretical work on the extent of linkage disequilibrium (LD) in the human genome, comparing the predictions of simple population-genetic models to available data. Several studies report significant LD over distances longer than those predicted by standard models, whereas some data from short, intergenic regions show less LD than would be expected. The apparent discrepancies between theory and data present a challenge-both to modelers and to human geneticists-to identify which important features are missing from our understanding of the biological processes that give rise to LD. Salient features may include demographic complications such as recent admixture, as well as genetic factors such as local variation in recombination rates, gene conversion, and the potential segregation of inversions. We also outline some implications that the emerging patterns of LD have for association-mapping strategies. In particular, we discuss what marker densities might be necessary for genomewide association scans.

Frank Dudbridge (2003)
Association tests of multilocus haplotypes are of interest both in linkage disequilibrium mapping and in candidate gene studies. For case-parent trios, I discuss the extension of existing multilocus methods to include ambiguous haplotypes in tests of models which distinguish between the cis and trans phase. A likelihood-ratio test is proposed, using the expectation-maximization (E-M) algorithm to account for haplotype ambiguities. Assumptions about the population structure are required, but realistic situations, including population stratification, which violate the assumptions lead to conservative tests. I describe a permutation procedure for the null hypothesis of interest, which controls for violation of the assumptions. For general pedigrees, I describe extensions of the pedigree disequilibrium test to include uncertain haplotypes. The summary statistics are replaced by their expected values over prior distributions of haplotype frequencies. If prior distributions are not available, a valid test is possible by using the E-M algorithm to estimate the null distribution of haplotype frequencies. Similar methods are available for quantitative traits. Exact permutation tests are difficult to construct in small samples, but an approximate procedure is appropriate in large samples, and can be used to account for dependencies between tests of multiple haplotypes and loci. Copyright 2003 Wiley-Liss, Inc.

The human orphan nuclear receptor PXR is activated by compounds that regulate CYP3A4 gene expression and cause drug interactions.

Sarah J Moore,  Steven Kliewer,  Marc McKee … (1998)
The cytochrome P-450 monooxygenase 3A4 (CYP3A4) is responsible for the oxidative metabolism of a wide variety of xenobiotics including an estimated 60% of all clinically used drugs. Although expression of the CYP3A4 gene is known to be induced in response to a variety of compounds, the mechanism underlying this induction, which represents a basis for drug interactions in patients, has remained unclear. We report the identification of a human (h) orphan nuclear receptor, termed the pregnane X receptor (PXR), that binds to a response element in the CYP3A4 promoter and is activated by a range of drugs known to induce CYP3A4 expression. Comparison of hPXR with the recently cloned mouse PXR reveals marked differences in their activation by certain drugs, which may account in part for the species-specific effects of compounds on CYP3A gene expression. These findings provide a molecular explanation for the ability of disparate chemicals to induce CYP3A4 levels and, furthermore, provide a basis for developing in vitro assays to aid in predicting whether drugs will interact in humans.