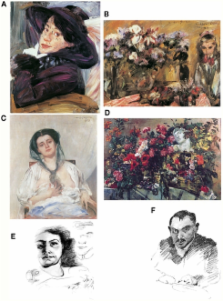 We here analyze the paintings and films of several visual artists, who suffered from a well-defined neuropsychological deficit, visuo-spatial hemineglect, following vascular stroke to the right brain. In our analysis we focus in particular on the oeuvre of Lovis Corinth and Luchino Visconti as both major artists continued to be highly productive over many years after their right brain damage. We analyzed their post-stroke paintings and films, indicate several aspects that differ from their pre-stroke work (omissions, use of color, perseveration, deformation), and propose–although both artists come from different times, countries, genres, and styles–that their post-stroke oeuvre reveals important similarities in style. We argue that these changes may be associated with visuo-spatial hemineglect and the right brain. We discuss future avenues of how the neuropsychological investigation of visual artists with and without neglect may allow us to investigate the relationship between brain and art.

Sophie Schwartz,  Claude-Alain Hauert,  karl-olof lovblad … (2010)
Spatial neglect is a perplexing neuropsychological syndrome, in which patients fail to detect (and/or respond to) stimuli located contralaterally to their (most often right) hemispheric lesion. Neglect is characterized by a wide heterogeneity, and a role for multiple components has been suggested, but the exact nature of the critical components remains unclear. Moreover, many different lesion sites have been reported, leading to enduring controversies about the relative contribution of different cortical and/or subcortical brain regions. Here we report a systematic anatomo-functional study of 80 patients with a focal right hemisphere stroke, who were examined by a series of neuropsychological tests assessing different clinical manifestations of neglect. We first performed a statistical factorial analysis of their behavioural performance across all tests, in order to break down neglect symptoms into coherent profiles of co-varying deficits. We then examined the neural correlates of these distinct neglect profiles using a statistical voxel-based lesion-symptom mapping method that correlated the anatomical extent of brain damage with the relative severity of deficits along the different profiles in each patient. Our factorial analysis revealed three main factors explaining 82% of the total variance across all neglect tests, which suggested distinct components related to perceptive/visuo-spatial, exploratory/visuo-motor, and allocentric/object-centred aspects of spatial neglect. Our anatomical voxel-based lesion-symptom mapping analysis pointed to specific neural correlates for each of these components, including the right inferior parietal lobule for the perceptive/visuo-spatial component, the right dorsolateral prefrontal cortex for the exploratory/visuo-motor component, and deep temporal lobe regions for the allocentric/object-centred component. By contrast, standard anatomical overlap analysis indicated that subcortical damage to paraventricular white matter tracts was associated with severe neglect encompassing several tests. Taken together, our results provide new support to the view that the clinical manifestations of hemispatial neglect might reflect a combination of distinct components affecting different domains of spatial cognition, and that intra-hemispheric disconnection due to white matter lesions might produce severe neglect by impacting on more than one functional domain.

G. Kerkhoff (2000)
The paper reviews the main findings of studies of hemispatial neglect after acquired brain lesions in people. The behavioral consequences of experimentally induced lesions in animals and electrophysiological studies, which shed light on the nature of the disorder, are briefly considered. Neglect is behaviorally defined as a deficit in processing or responding to sensory stimuli in the contralateral hemispace, a part of the own body, the part of an imagined scene, or may include the failure to act with the contralesional limbs despite intact motor functions. Neglect in humans is frequently encountered after right parieto-temporal lesions and leads to a multicomponent syndrome of sensory, motor and representational deficits. Relevant findings relating to neglect, extinction and unawareness are reviewed and include the following topics: etiological and anatomical basis, recovery; allocentric, egocentric, object-centered and representational neglect; motor neglect and directional hypokinesia; elementary sensorimotor and associated disorders; subdivisions of space and frames of reference; extinction versus neglect; covert processing of information; unawareness of deficits; human and animal models; effects of sensory stimulation and rehabilitation techniques.

Edited by: Idan Segev, The Hebrew University of Jerusalem, Israel