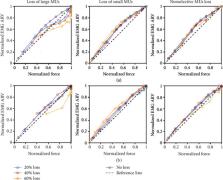 Models of recruitment and rate coding organization in motor-unit pools.

Aftab E Patla,  D. C. Winter,  Andrew Fuglevand (1993)
1. Isometric muscle force and the surface electromyogram (EMG) were simulated from a model that predicted recruitment and firing times in a pool of 120 motor units under different levels of excitatory drive. The EMG-force relationships that emerged from simulations using various schedules of recruitment and rate coding were compared with those observed experimentally to determine which of the modeled schemes were plausible representations of the actual organization in motor-unit pools. 2. The model was comprised of three elements: a motoneuron model, a motor-unit force model, and a model of the surface EMG. Input to the neuron model was an excitatory drive function representing the net synaptic input to motoneurons during voluntary muscle contractions. Recruitment thresholds were assigned such that many motoneurons had low thresholds and relatively few neurons had high thresholds. Motoneuron firing rate increased as a linear function of excitatory drive between recruitment threshold and peak firing rate levels. The sequence of discharge times for each motoneuron was simulated as a random renewal process. 3. Motor-unit twitch force was estimated as an impulse response of a critically damped, second-order system. Twitch amplitudes were assigned according to rank in the recruitment order, and twitch contraction times were inversely related to twitch amplitude. Nonlinear force-firing rate behavior was simulated by varying motor-unit force gain as a function of the instantaneous firing rate and the contraction time of the unit. The total force exerted by the muscle was computed as the sum of the motor-unit forces. 4. Motor-unit action potentials were simulated on the basis of estimates of the number and location of motor-unit muscle fibers and the propagation velocity of the fiber action potentials. The number of fibers innervated by each unit was assumed to be directly proportional to the twitch force. The area of muscle encompassing unit fibers was proportional to the number of fibers innervated, and the location of motor-unit territories were randomly assigned within the muscle cross section. Action-potential propagation velocities were estimated from an inverse function of contraction time. The train of discharge times predicted from the motoneuron model determined the occurrence of each motor-unit action potential. The surface EMG was synthesized as the sum of all motor-unit action-potential trains. 5. Two recruitment conditions were tested: narrow (limit of recruitment 70% maximum excitation).(ABSTRACT TRUNCATED AT 400 WORDS)

The relation between the surface electromyogram and muscular force.

Simon H J Brown,  John R. Stein (1975)
1. Motor units in the first dorsal interosseus muscle of normal human subjects were recorded by needle electrodes, together with the surface electromyogram (e.m.g.). The wave form contributed by each motor unit to the surface e.m.g. was determined by signal averaging. 2. The peak-to-peak amplitude of the wave form contributed to the surface e.m.g. by a motor unit increased approximately as the square root of the threshold force at which the unit was recruited. The peak-to-peak duration of the wave form was independent of the threshold force. 3. Large and small motor units are uniformly distributed throughout this muscle, and the muscle fibres making up a motor unit may be widely dispersed. 4. The rectified surface e.m.g. was computed as a function of force, based on the sample of motor units recorded. The largest contribution of motor unit recruitment occurs at low force levels, while the contribution of increased firing rate becomes more important at higher force levels. 5. Possible bases for the common experimental observation that the mean rectified surface e.m.g. varies linearly with the force generated by a muscle are discussed. E.m.g. potentials and contractile responses may both sum non-linearly at moderate to high force levels, but in such a way that the rectified surface e.m.g. is still approximately linearly related to the force produced by the muscle.