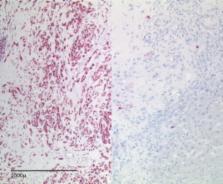 A 60-year-old patient presented with a solitary mass within the right hepatic lobe. Diagnostic imaging revealed a solid tumor on the diameter of 3 cm. In absence of any extrahepatic manifestation and based on FNAC findings the lesion was classisfied a primary hepatic chondroid sarcoma. However, after right hemihepatectomy histologic assessment resulted the final diagnosis of a benign chondroid hamartoma. Our findings add another variant to the versatile phenotype of liver hamartoma.

Undifferentiated embryonal sarcoma with unusual features arising within mesenchymal hamartoma of the liver: report of a case and review of the literature.

M O'Sullivan,  P Swanson,  J Knoll … (2015)
Undifferentiated embryonal sarcoma (UES) is a rare and highly malignant hepatic neoplasm, affecting almost exclusively the pediatric population. It has replaced malignant mesenchymoma, under which diagnostic term the first three cases were described. A link between embryonal sarcoma and mesenchymal hamartoma of the liver (MHL) has long been proposed, because of clinicopathologic overlaps of these entities; however, until recently, this association remained tenuous. Cases of UES arising in a background of mesenchymal hamartoma of the liver have previously been reported in two teenage girls. Discovery of a similar genetic abnormality in MHL and UES has clinched the supposed link between them. There have also been two reports of UES with prominent cystification, one associated with peripheral eosinophilia, and thereby masquerading as hydatid cyst of the liver. We report a case of UES arising in a young boy with MHL, with unusual histologic features, including large mesothelial-lined cysts and ectopic adrenal cortical tissue under Glisson's capsule.

Mesenchymal hamartoma of the liver: report of 30 cases and review of the literature.

J T Stocker,  K Ishak (2015)
Thirty cases of mesenchymal hamartoma of the liver are presented and compared with 42 previously published cases. The patients, 69% male, range in age from newborn to 10 years (average age 15 months, median age 10 months). Except for occasional cases in which the lesion is an incidental finding at autopsy, most present with progressive abdominal enlargement over a period of days to months. Physical and radiologic examinations are nonspecific except for the demonstration of a mass within or attached to the liver. The masses are large, averaging 1311 g, and frequently contain cysts filled with clear fluid or gelatinous material. Histologic examination shows a mixture of loose mesenchymal tissue, bile ducts, connective tissue, and hepatocytes along with cysts formed either from degenerative areas of mesenchyme or from dilated bile ducts and lympathics. Treatment is partial or total excision of the lesion. Mortality (7-17%) is related to intraoperative or postoperative complications. Recurrence or malignant transformation has not been noted.

Mesenchymal hamartoma of the liver--new insight into histogenesis.

Dietrich von Schweinitz,  Barbara Gomez Dammeier,  Sylvia Glüer (1999)
Mesenchymal hamartoma (MH) of the liver is thought to develop from the ductal plates of the prenatal liver. This immunohistochemical study was performed to gain insight into the pathophysiology of its development. Specimens from four MHs with adjacent liver, in one case from a biopsy and from the resected lesion after 6 years follow-up, were investigated with immunostaining on cryostatsectionswith antibodies against cytokeratins, vimentin, desmin and alpha-actin, as well as von Willebrand factor (factor VIII), fibroblast growth factor (FGF) receptors, FGF-1 (acidic FGF), FGF-2 (basic FGF), and the proliferation-associated Ki67 antigen. Fibrous tissue of MH stained positive not only for vimentin, but also for desmin and alpha-actin, whereas cytokeratins and factor VIII showed specific staining in biliary cysts and endothelial cells, respectively. All mesenchymal cells expressed proteins of the FGF receptor family. Although FGF-1 was only scarcely detectable, there was an accumulation of FGF-2 in borderline areas of liver to MH. Multiple Ki67-positive mesenchymal cells could be identified in these regions in all three MHs. However, we could not detect any proliferative activity in the MHs after follow-up. The proliferative process in MH is still active during early childhood. FGF-2 may have a role in promoting this process. The positivity for desmin and alpha-actin of the lesions suggests that fat-storing (Ito) cells of the immature liver may be involved in the development of MH.

This is an Open Access article distributed under the terms of the Creative Commons Attribution License ( http://creativecommons.org/licenses/by-nc-nd/3.0/). You are free to copy, distribute and transmit the work, provided the original author and source are credited.