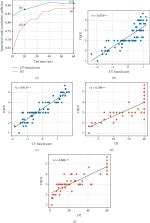 This study aimed to leverage computer vision (CV) technology to develop a technique for quantifying postural control. A conventional quantitative index, occupational therapists' qualitative clinical evaluations, and CV-based quantitative indices using an image analysis algorithm were applied to evaluate the postural control of 34 typically developed preschoolers. The effectiveness of the CV-based indices was investigated relative to current methods to explore the clinical applicability of the proposed method. The capacity of the CV-based indices to reflect therapists' qualitative evaluations was confirmed. Furthermore, compared to the conventional quantitative index, the CV-based indices provided more detailed quantitative information with lower costs. CV-based evaluations enable therapists to quantify details of motor performance that are currently observed qualitatively. The development of such precise quantification methods will improve the science and practice of occupational therapy and allow therapists to perform to their full potential.

Impairment in movement skills of children with autistic spectrum disorders.

Susie Chandler, Tom Loucas, Andrew Pickles … (2009)
We undertook this study to explore the degree of impairment in movement skills in children with autistic spectrum disorders (ASD) and a wide IQ range. Movement skills were measured using the Movement Assessment Battery for Children (M-ABC) in a large, well defined, population-derived group of children (n=101: 89 males,12 females; mean age 11y 4mo, SD 10mo; range 10y-14y 3mo) with childhood autism and broader ASD and a wide range of IQ scores. Additionally, we tested whether a parent-completed questionnaire, the Developmental Coordination Disorder Questionnaire (DCDQ), was useful in identifying children who met criteria for movement impairments after assessment (n=97 with complete M-ABCs and DCDQs). Of the children with ASD, 79% had definite movement impairments on the M-ABC; a further 10% had borderline problems. Children with childhood autism were more impaired than children with broader ASD, and children with an IQ less than 70 were more impaired than those with IQ more than 70. This is consistent with the view that movement impairments may arise from a more severe neurological impairment that also contributes to intellectual disability and more severe autism. Movement impairment was not associated with everyday adaptive behaviour once the effect of IQ was controlled for. The DCDQ performed moderately well as a screen for possible motor difficulties. Movement impairments are common in children with ASD. Systematic assessment of movement abilities should be considered a routine investigation.