The potential of the solitary parasitoid Microctonus brassicae for the biological control of the adult cabbage stem flea beetle, Psylliodes chrysocephala 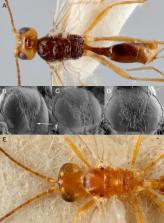 N. Simon-Delso, V. Amaral-Rogers, L P Belzunces … (2014)
Since their discovery in the late 1980s, neonicotinoid pesticides have become the most widely used class of insecticides worldwide, with large-scale applications ranging from plant protection (crops, vegetables, fruits), veterinary products, and biocides to invertebrate pest control in fish farming. In this review, we address the phenyl-pyrazole fipronil together with neonicotinoids because of similarities in their toxicity, physicochemical profiles, and presence in the environment. Neonicotinoids and fipronil currently account for approximately one third of the world insecticide market; the annual world production of the archetype neonicotinoid, imidacloprid, was estimated to be ca. 20,000 tonnes active substance in 2010. There were several reasons for the initial success of neonicotinoids and fipronil: (1) there was no known pesticide resistance in target pests, mainly because of their recent development, (2) their physicochemical properties included many advantages over previous generations of insecticides (i.e., organophosphates, carbamates, pyrethroids, etc.), and (3) they shared an assumed reduced operator and consumer risk. Due to their systemic nature, they are taken up by the roots or leaves and translocated to all parts of the plant, which, in turn, makes them effectively toxic to herbivorous insects. The toxicity persists for a variable period of time—depending on the plant, its growth stage, and the amount of pesticide applied. A wide variety of applications are available, including the most common prophylactic non-Good Agricultural Practices (GAP) application by seed coating. As a result of their extensive use and physicochemical properties, these substances can be found in all environmental compartments including soil, water, and air. Neonicotinoids and fipronil operate by disrupting neural transmission in the central nervous system of invertebrates. Neonicotinoids mimic the action of neurotransmitters, while fipronil inhibits neuronal receptors. In doing so, they continuously stimulate neurons leading ultimately to death of target invertebrates. Like virtually all insecticides, they can also have lethal and sublethal impacts on non-target organisms, including insect predators and vertebrates. Furthermore, a range of synergistic effects with other stressors have been documented. Here, we review extensively their metabolic pathways, showing how they form both compound-specific and common metabolites which can themselves be toxic. These may result in prolonged toxicity. Considering their wide commercial expansion, mode of action, the systemic properties in plants, persistence and environmental fate, coupled with limited information about the toxicity profiles of these compounds and their metabolites, neonicotinoids and fipronil may entail significant risks to the environment. A global evaluation of the potential collateral effects of their use is therefore timely. The present paper and subsequent chapters in this review of the global literature explore these risks and show a growing body of evidence that persistent, low concentrations of these insecticides pose serious risks of undesirable environmental impacts.

Paul Hebert, Sujeevan Ratnasingham, Evgeny V. Zakharov … (2016)
Recent estimates suggest that the global insect fauna includes fewer than six million species, but this projection is very uncertain because taxonomic work has been limited on some highly diverse groups. Validation of current estimates minimally requires the investigation of all lineages that are diverse enough to have a substantial impact on the final species count. This study represents a first step in this direction; it employs DNA barcoding to evaluate patterns of species richness in 27 orders of Canadian insects. The analysis of over one million specimens revealed species counts congruent with earlier results for most orders. However, Diptera and Hymenoptera were unexpectedly diverse, representing two-thirds of the 46 937 barcode index numbers (=species) detected. Correspondence checks between known species and barcoded taxa showed that sampling was incomplete, a result confirmed by extrapolations from the barcode results which suggest the occurrence of at least 94 000 species of insects in Canada, a near doubling from the prior estimate of 54 000 species. One dipteran family, the Cecidomyiidae, was extraordinarily diverse with an estimated 16 000 species, a 10-fold increase from its predicted diversity. If Canada possesses about 1% of the global fauna, as it does for known taxa, the results of this study suggest the presence of 10 million insect species with about 1.8 million of these taxa in the Cecidomyiidae. If so, the global species count for this fly family may exceed the combined total for all 142 beetle families. If extended to more geographical regions and to all hyperdiverse groups, DNA barcoding can rapidly resolve the current uncertainty surrounding a species count for the animal kingdom. A newly detailed understanding of species diversity may illuminate processes important in speciation, as suggested by the discovery that the most diverse insect lineages in Canada employ an unusual mode of reproduction, haplodiploidy. This article is part of the themed issue ‘From DNA barcodes to biomes’.