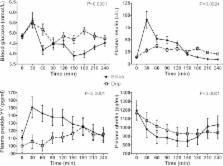 We aimed to demonstrate the effect of continuous or bolus nasogastric feeding on gastric emptying, small bowel water content, and splanchnic blood flow measured by magnetic resonance imaging (MRI) in the context of changes in plasma gastrointestinal hormone secretion.

Nasogastric/nasoenteral tube feeding is often complicated by diarrhea but the contribution of feeding strategy to the etiology is unclear.

Twelve healthy adult male participants who underwent nasogastric intubation before a baseline MRI scan, received 400 mL of Resource Energy (Nestle) as a bolus over 5 minutes or continuously over 4 hours via pump in this randomized crossover study. Changes in gastric volume, small bowel water content, and superior mesenteric artery blood flow and velocity were measured over 4 hours using MRI and blood glucose and plasma concentrations of insulin, peptide YY, and ghrelin were assayed every 30 minutes.

Continuous nasogastric feeding does not increase small bowel water content, thus fluid flux within the small bowel is not a major contributor to the etiology of tube feeding-related diarrhea.

T.E. Adrian,  G.-L. Ferri,  A.J. Bacarese-Hamilton … (1985)
A radioimmunoassay has been developed for the new intestinal hormonal peptide tyrosine tyrosine [peptide YY (PYY)]. Peptide YY concentrations were measured in separated layers of the human gastrointestinal tract, where PYY was found exclusively in the mucosal epithelium which contained the endocrine cells. Peptide YY was found throughout the small intestine, in very low concentrations (5 pmol/g) in duodenum (6 pmol/g) and jejunum (5 pmol/g), but in higher concentrations in the terminal ileum (84 pmol/g). High concentrations were found throughout the colon (ascending 82 pmol/g, sigmoid 196 pmol/g), being maximum in the rectum (480 pmol/g). The major molecular form of PYY-like immunoreactivity in human intestine appeared to be identical to pure porcine hormone, both as judged by gel permeation chromatography and by reverse-phase high-pressure liquid chromatography. Basal plasma concentrations of PYY were low but rose in response to food, remaining elevated for several hours postprandially. The known potent biologic actions of PYY, its high concentrations in gut endocrine cells, and its release into the circulation after a normal meal suggest that this peptide may function physiologically as a circulating gut hormone.

Effects of peptide YY (PYY) on mouth to caecum intestinal transit time and on the rate of gastric emptying in healthy volunteers.

T. Chatterjee,  Lee Bloom,  G Carolan … (1987)
The effect of an infusion of two doses of peptide YY (PYY), a novel putative gastrointestinal hormone, has been assessed on mouth to caecum intestinal transit time and on the rate of gastric emptying after ingestion of an inert 200 ml liquid meal thought unlikely to interrupt fasting gastrointestinal motility patterns. A low dose of PYY was chosen to give plasma concentrations within the range seen postprandially in healthy subjects, while the high dose mimicked the raised levels seen in several malabsorptive conditions. During infusion of PYY at 0.18 pmol/kg/min plasma concentrations rose from a basal of 8 +/- 2 pmol/l to 38 +/- 5 pmol/l and at 0.51 pmol/kg/min to 87 +/- 10 pmol/l. Mouth to caecum transit time was delayed from 67 +/- 4 mins on the saline infusion day to 94 +/- 7 mins (p less than 0.01) on the low dose and 192 +/- 9 mins (p less than 0.001) on the high dose infusion day. Time to 50% gastric emptying was prolonged from 37 +/- 8 mins during saline infusion to 63 +/- 10 mins (p less than 0.05) during low and 130 +/- 12 mins (p less than 0.001) during high dose infusion. Thus the infusion of PYY shows a dose related inhibition of mouth to caecum intestinal transit time and of the rate of gastric emptying and suggests this novel hormonal peptide to be of importance in gastrointestinal physiology.

This is an open-access article distributed under the terms of the Creative Commons Attribution-Non Commercial-No Derivatives License 4.0, where it is permissible to download and share the work provided it is properly cited. The work cannot be changed in any way or used commercially. http://creativecommons.org/licenses/by-nc-nd/4.0