A taxonomic reassessment of the genus Balsamia from China 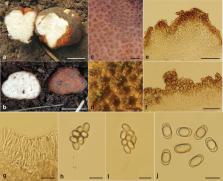 Molecular analysis of the genus Balsamia was conducted with ITS and 28S sequences available, including newly gained sequences from Chinese specimens. Combined with the morphological examinations, a new hypogeous species, Balsamia lishanensis was described and illustrated from North China, which is morphologically characterized by reddish brown ascomata covered with fine warts, the whitish gleba with numerous small chambers, 3–5 layers peridium with reddish brown polygonal cells and the smooth and regular ellipsoid ascospores with one large oil drop. Two species previously described as Barssia were transferred to Balsamia . Balsamia platyspora was confirmed to be in existence in China based on newly collected specimen. A key to the Chinese Balsamia species was provided.

Iván Alfaro,  François Lutzoni,  Stefan Zoller (2003)
Bayesian Markov chain Monte Carlo sampling has become increasingly popular in phylogenetics as a method for both estimating the maximum likelihood topology and for assessing nodal confidence. Despite the growing use of posterior probabilities, the relationship between the Bayesian measure of confidence and the most commonly used confidence measure in phylogenetics, the nonparametric bootstrap proportion, is poorly understood. We used computer simulation to investigate the behavior of three phylogenetic confidence methods: Bayesian posterior probabilities calculated via Markov chain Monte Carlo sampling (BMCMC-PP), maximum likelihood bootstrap proportion (ML-BP), and maximum parsimony bootstrap proportion (MP-BP). We simulated the evolution of DNA sequence on 17-taxon topologies under 18 evolutionary scenarios and examined the performance of these methods in assigning confidence to correct monophyletic and incorrect monophyletic groups, and we examined the effects of increasing character number on support value. BMCMC-PP and ML-BP were often strongly correlated with one another but could provide substantially different estimates of support on short internodes. In contrast, BMCMC-PP correlated poorly with MP-BP across most of the simulation conditions that we examined. For a given threshold value, more correct monophyletic groups were supported by BMCMC-PP than by either ML-BP or MP-BP. When threshold values were chosen that fixed the rate of accepting incorrect monophyletic relationship as true at 5%, all three methods recovered most of the correct relationships on the simulated topologies, although BMCMC-PP and ML-BP performed better than MP-BP. BMCMC-PP was usually a less biased predictor of phylogenetic accuracy than either bootstrapping method. BMCMC-PP provided high support values for correct topological bipartitions with fewer characters than was needed for nonparametric bootstrap.

A Rambaut (2000)
TipDate is a program that will use sequences that have been isolated at different dates to estimate their rate of molecular evolution. The program provides a maximum likelihood estimate of the rate and also the associated date of the most recent common ancestor of the sequences, under a model which assumes a constant rate of substitution (molecular clock) but which accommodates the dates of isolation. Confidence intervals for these parameters are also estimated. The approach was applied to a sample of 17 dengue virus serotype 4 sequences, isolated at dates ranging from 1956 to 1994. The rate of substitution for this serotype was estimated to be 7.91 x 10(-4) substitutions per site per year (95% confidence intervals of 6.07 x 10(-4), 9.86 x 10(-4)). This is compatible with a date of 1922 (95% confidence intervals of 1900-1936) for the most recent common ancestor of these sequences. TipDate can be obtained by WWW from http://evolve.zoo. ox.ac.uk/software. The package includes the source code, manual and example files. Both UNIX and Apple Macintosh versions are available from the same site.

Gregory Bonito,  Matthew Smith,  Michael A. Nowak … (2013)
Truffles have evolved from epigeous (aboveground) ancestors in nearly every major lineage of fleshy fungi. Because accelerated rates of morphological evolution accompany the transition to the truffle form, closely related epigeous ancestors remain unknown for most truffle lineages. This is the case for the quintessential truffle genus Tuber, which includes species with socio-economic importance and esteemed culinary attributes. Ecologically, Tuber spp. form obligate mycorrhizal symbioses with diverse species of plant hosts including pines, oaks, poplars, orchids, and commercially important trees such as hazelnut and pecan. Unfortunately, limited geographic sampling and inconclusive phylogenetic relationships have obscured our understanding of their origin, biogeography, and diversification. To address this problem, we present a global sampling of Tuberaceae based on DNA sequence data from four loci for phylogenetic inference and molecular dating. Our well-resolved Tuberaceae phylogeny shows high levels of regional and continental endemism. We also identify a previously unknown epigeous member of the Tuberaceae – the South American cup-fungus Nothojafnea thaxteri (E.K. Cash) Gamundí. Phylogenetic resolution was further improved through the inclusion of a previously unrecognized Southern hemisphere sister group of the Tuberaceae. This morphologically diverse assemblage of species includes truffle (e.g. Gymnohydnotrya spp.) and non-truffle forms that are endemic to Australia and South America. Southern hemisphere taxa appear to have diverged more recently than the Northern hemisphere lineages. Our analysis of the Tuberaceae suggests that Tuber evolved from an epigeous ancestor. Molecular dating estimates Tuberaceae divergence in the late Jurassic (∼156 million years ago), with subsequent radiations in the Cretaceous and Paleogene. Intra-continental diversification, limited long-distance dispersal, and ecological adaptations help to explain patterns of truffle evolution and biodiversity.