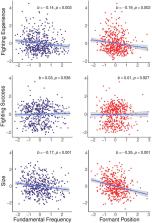 Human voice pitch is highly sexually dimorphic and eminently quantifiable, making it an ideal phenotype for studying the influence of sexual selection. In both traditional and industrial populations, lower pitch in men predicts mating success, reproductive success, and social status and shapes social perceptions, especially those related to physical formidability. Due to practical and ethical constraints however, scant evidence tests the central question of whether male voice pitch and other acoustic measures indicate actual fighting ability in humans. To address this, we examined pitch, pitch variability, and formant position of 475 mixed martial arts (MMA) fighters from an elite fighting league, with each fighter’s acoustic measures assessed from multiple voice recordings extracted from audio or video interviews available online (YouTube, Google Video, podcasts), totaling 1312 voice recording samples. In four regression models each predicting a separate measure of fighting ability (win percentages, number of fights, Elo ratings, and retirement status), no acoustic measure significantly predicted fighting ability above and beyond covariates. However, after fight statistics, fight history, height, weight, and age were used to extract underlying dimensions of fighting ability via factor analysis, pitch and formant position negatively predicted “Fighting Experience” and “Size” factor scores in a multivariate regression model, explaining 3–8% of the variance. Our findings suggest that lower male pitch and formants may be valid cues of some components of fighting ability in men.

Aldenor Santos,  Gisele O. da Rocha,  Jailson de Andrade (2019)
Polycyclic aromatic compounds (PACs) are known due to their mutagenic activity. Among them, 2-nitrobenzanthrone (2-NBA) and 3-nitrobenzanthrone (3-NBA) are considered as two of the most potent mutagens found in atmospheric particles. In the present study 2-NBA, 3-NBA and selected PAHs and Nitro-PAHs were determined in fine particle samples (PM 2.5) collected in a bus station and an outdoor site. The fuel used by buses was a diesel-biodiesel (96:4) blend and light-duty vehicles run with any ethanol-to-gasoline proportion. The concentrations of 2-NBA and 3-NBA were, on average, under 14.8 µg g−1 and 4.39 µg g−1, respectively. In order to access the main sources and formation routes of these compounds, we performed ternary correlations and multivariate statistical analyses. The main sources for the studied compounds in the bus station were diesel/biodiesel exhaust followed by floor resuspension. In the coastal site, vehicular emission, photochemical formation and wood combustion were the main sources for 2-NBA and 3-NBA as well as the other PACs. Incremental lifetime cancer risk (ILCR) were calculated for both places, which presented low values, showing low cancer risk incidence although the ILCR values for the bus station were around 2.5 times higher than the ILCR from the coastal site.

Why We (Usually) Don't Have to Worry About Multiple Comparisons