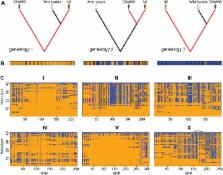 Recombination rate and linkage disequilibrium, the latter a function of population genomic processes, are the critical parameters for mapping by linkage and association, and their patterns in Caenorhabditis elegans are poorly understood. We performed high-density SNP genotyping on a large panel of recombinant inbred advanced intercross lines (RIAILs) of C. elegans to characterize the landscape of recombination and, on a panel of wild strains, to characterize population genomic patterns. We confirmed that C. elegans autosomes exhibit discrete domains of nearly constant recombination rate, and we show, for the first time, that the pattern holds for the X chromosome as well. The terminal domains of each chromosome, spanning about 7% of the genome, exhibit effectively no recombination. The RIAILs exhibit a 5.3-fold expansion of the genetic map. With median marker spacing of 61 kb, they are a powerful resource for mapping quantitative trait loci in C. elegans. Among 125 wild isolates, we identified only 41 distinct haplotypes. The patterns of genotypic similarity suggest that some presumed wild strains are laboratory contaminants. The Hawaiian strain, CB4856, exhibits genetic isolation from the remainder of the global population, whose members exhibit ample evidence of intercrossing and recombining. The population effective recombination rate, estimated from the pattern of linkage disequilibrium, is correlated with the estimated meiotic recombination rate, but its magnitude implies that the effective rate of outcrossing is extremely low, corroborating reports of selection against recombinant genotypes. Despite the low population, effective recombination rate and extensive linkage disequilibrium among chromosomes, which are techniques that account for background levels of genomic similarity, permit association mapping in wild C. elegans strains.

C. elegans is a model system for diverse fields of biology, but its ability to serve as a model for quantitative trait gene mapping depends on its recombination rate in the laboratory and in nature. The latter is a function of how worms mate and migrate in the wild. We examined the patterns of recombination in a population that we put through thousands of meioses in the laboratory and in a collection of strains isolated from nature. The data suggest that meiotic recombination rate is highly regular in worms, with discrete domains whose boundaries we identify. The pattern in natural strains suggests that population structure, population size, outcrossing rate, and selection combine to suppress the overall effects of recombination. Moreover, some “wild” strains appear to be laboratory contaminants. Nevertheless, the history of recombination in wild worms is sufficient to permit correlations between genotype and phenotype to pinpoint the loci responsible for phenotypic variation.

P Sunnucks,  Barbara Hales (1996)
Polymerase chain reaction (PCR) products corresponding to 803 bp of the cytochrome oxidase subunits I and II region of mitochondrial DNA (mtDNA COI-II) were deduced to consist of multiple haplotypes in three Sitobion species. We investigated the molecular basis of these observations. PCR products were cloned, and six clones from one individual per species were sequenced. In each individual, one sequence was found commonly, but also two or three divergent sequences were seen. The divergent sequences were shown to be nonmitochondrial by sequencing from purified mtDNA and Southern blotting experiments. All seven nonmitochondrial clones sequenced to completion were unique. Nonmitochondrial sequences have a high proportion of unique sites, and very few characters are shared between nonmitochondrial clones to the exclusion of mtDNA. From these data, we infer that fragments of mtDNA have been transposed separately (probably into aphid chromosomes), at a frequency only known to be equalled in humans. The transposition phenomenon appears to occur infrequently or not at all in closely related genera and other aphids investigated. Patterns of nucleotide substitution in mtDNA inferred over a parsimony tree are very different from those in transposed sequences. Compared with mtDNA, nonmitochondrial sequences have less codon position bias, more even exchanges between A, G, C and T, and a higher proportion of nonsynonymous replacements. Although these data are consistent with the transposed sequences being under less constraint than mtDNA, changes in the nonmitochondrial sequences are not random: there remains significant position bias, and probable excesses of synonymous replacements and of conservative inferred amino acid replacements. We conclude that a proportion of the inferred change in the nonmitochondrial sequences occurred before transposition. We believe that Sitobion aphids (and other species exhibiting mtDNA transposition) may be important for studying the molecular evolution of mtDNA and pseudogenes. However, our data highlight the need to establish the true evolutionary relationships between sequences in comparative investigations.

Ronald H. A. Plasterk,  Robert Waterston,  Edward T. Yeh … (2001)
Single nucleotide polymorphisms (SNPs) are valuable genetic markers of human disease. They also comprise the highest potential density marker set available for mapping experimentally derived mutations in model organisms such as Caenorhabditis elegans. To facilitate the positional cloning of mutations we have identified polymorphisms in CB4856, an isolate from a Hawaiian island that shows a uniformly high density of polymorphisms compared with the reference Bristol N2 strain. Based on 5.4 Mbp of aligned sequences, we predicted 6,222 polymorphisms. Furthermore, 3,457 of these markers modify restriction enzyme recognition sites ('snip-SNPs') and are therefore easily detected as RFLPs. Of these, 493 were experimentally confirmed by restriction digest to produce a snip-SNP map of the worm genome. A mapping strategy using snip-SNPs and bulked segregant analysis (BSA) is outlined. CB4856 is crossed into a mutant strain, and exclusion of CB4856 alleles of a subset of snip-SNPs in mutant progeny is assessed with BSA. The proximity of a linked marker to the mutation is estimated by the relative proportion of each form of the biallelic marker in populations of wildtype and mutant genomes. The usefulness of this approach is illustrated by the rapid mapping of the dyf-5 gene.

Joseph R. Ecker,  Vincent Plagnol,  Neil R. Clark … (2007)
Linkage disequilibrium (LD) is a major aspect of the organization of genetic variation in natural populations. Here we describe the genome-wide pattern of LD in a sample of 19 Arabidopsis thaliana accessions using 341,602 non-singleton SNPs. LD decays within 10 kb on average, considerably faster than previously estimated. Tag SNP selection algorithms and 'hide-the-SNP' simulations suggest that genome-wide association mapping will require only 40%-50% of the observed SNPs, a reduction similar to estimates in a sample of African Americans. An Affymetrix genotyping array containing 250,000 SNPs has been designed based on these results; we demonstrate that it should have more than adequate coverage for genome-wide association mapping. The extent of LD is highly variable, and we find clear evidence of recombination hotspots, which seem to occur preferentially in intergenic regions. LD also reflects the action of selection, and it is more extensive between nonsynonymous polymorphisms than between synonymous polymorphisms.

Publisher ID: 08-PLGE-RA-1570R2
DOI: 10.1371/journal.pgen.1000419
PMC ID: 2652117
PubMed ID: 19283065
Copyright statement: Rockman, Kruglyak. This is an open-access article distributed under the terms of the Creative Commons Attribution License, which permits unrestricted use, distribution, and reproduction in any medium, provided the original author and source are credited.