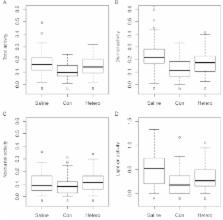 Dengue is one of the world’s most important mosquito-borne diseases and is usually transmitted by one of two vector species: Aedes aegypti or Aedes albopictus . These two diurnal mosquitoes are frequently found coexisting in similar habitats, enabling interactions between adults, such as cross-mating. The objective of this study was to assess cross-mating between Ae. aegypti females and Ae. albopictus males under artificial conditions and evaluate the locomotor activity of Ae. aegypti virgin females injected with male accessory gland (MAG) homogenates to infer the physiological and behavioural responses to interspecific mating. After seven days of exposure, 3.3-16% of Ae. aegypti females mated with Ae. albopictus males. Virgin Ae. aegypti females injected with conspecific and heterospecific MAGs showed a general decrease in locomotor activity compared to controls and were refractory to mating with conspecific males. The reduction in diurnal locomotor activity induced by injections of conspecific or heterospecific MAGs is consistent with regulation of female reproductive activities by male substances, which are capable of sterilising female Ae. aegypti through satyrisation by Ae. albopictus .

R: A Language and Environment for Statistical Computing