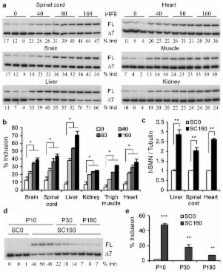 The plasticity of aging: insights from long-lived mutants.

Cynthia Kenyon (2005)
Mutations in genes affecting endocrine signaling, stress responses, metabolism, and telomeres can all increase the life spans of model organisms. These mutations have revealed evolutionarily conserved pathways for aging, some of which appear to extend life span in response to sensory cues, caloric restriction, or stress. Many mutations affecting longevity pathways delay age-related disease, and the molecular analysis of these pathways is leading to a mechanistic understanding of how these two processes--aging and disease susceptibility--are linked.

Rescue of the spinal muscular atrophy phenotype in a mouse model by early postnatal delivery of SMN.

Correspondence and requests for materials should be addressed to A.R.K. ( Krainer@ 123456cshl.edu )