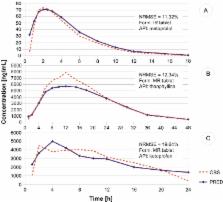 The aim of this study was to develop a generalized in vitro-in vivo relationship (IVIVR) model based on in vitro dissolution profiles together with quantitative and qualitative composition of dosage formulations as covariates. Such a model would be of substantial aid in the early stages of development of a pharmaceutical formulation, when no in vivo results are yet available and it is impossible to create a classical in vitro-in vivo correlation (IVIVC)/IVIVR.

Chemoinformatics software was used to compute the molecular descriptors of drug substances (ie, active pharmaceutical ingredients) and excipients. The data were collected from the literature. Artificial neural networks were used as the modeling tool. The training process was carried out using the 10-fold cross-validation technique.

The database contained 93 formulations with 307 inputs initially, and was later limited to 28 in a course of sensitivity analysis. The four best models were introduced into the artificial neural network ensemble. Complete in vivo profiles were predicted accurately for 37.6% of the formulations.

It has been shown that artificial neural networks can be an effective predictive tool for constructing IVIVR in an integrated generalized model for various formulations. Because IVIVC/IVIVR is classically conducted for 2–4 formulations and with a single active pharmaceutical ingredient, the approach described here is unique in that it incorporates various active pharmaceutical ingredients and dosage forms into a single model. Thus, preliminary IVIVC/IVIVR can be available without in vivo data, which is impossible using current IVIVC/IVIVR procedures.

Citric acid as excipient in multiple-unit enteric-coated tablets for targeting drugs on the colon.

P Nykänen,  S Lempää,  M.-L Aaltonen … (2001)
Delivery of drugs to the large bowel has been extensively investigated during the last decade. The aim of this study was to investigate whether enteric-coated tablets could be made from enteric-coated matrix granules and drug release targeted to the colon. Whether in vitro drug release rate and in vivo absorption could be delayed by adding citric acid to the granules and/or to the tablet matrix was also studied. Ibuprofen was used as model drug because it is absorbed throughout the gastrointestinal tract. Eudragit S and Aqoat AS-HF were used as enteric polymers. Drug release rates were studied at different pH levels and drug absorption was studied in bioavailability tests. The conclusion was that citric acid retarded in vitro drug release when used in multiple-unit tablets. In vivo absorption of ibuprofen was markedly delayed when citric acid was included in both granules and tablet matrix. Further studies are needed to determine the optimal amount of citric acid in formulations.

In vitro and in vivo evaluation of a fast-disintegrating lyophilized dry emulsion tablet containing griseofulvin.

Ahmed Aboul-Enein,  Mustafa Ahmed (2007)
Development of a fast-disintegrating lyophilized dry emulsion (LDE) tablet that enhanced the in vitro dissolution and in vivo absorption of griseofulvin (GF) is presented. The LDE tablets were prepared by freeze-drying o/w emulsions of GF, a drug for which bioavailability is known to be enhanced by fat co-administration. Oil-in-water emulsions were prepared using a gelatin solution (2%, w/v) as the water phase and medium chain triglycerides (Miglyol) or sesame oil as the oil phase. In addition, different emulsifiers were evaluated. The influence of formulation parameters on the disintegration and in vitro dissolution of GF from LDE tablets along with other tablet characteristics were investigated. A significant influence of the emulsifier type on the tablet disintegration time was seen (p<0.01). Results obtained from dissolution studies showed that LDE tablets of GF improved the dissolution rate of the drug compared to the plain drug. The extent of absorption of GF from a selected LDE tablet formulation as compared to an immediate release conventional tablet as reference after single oral dose (125mg) administration was determined in four healthy subjects using a randomized crossover design. In this study, the rate of absorption of GF from LDE tablet was faster than that from the reference tablet and had significantly higher (p=0.02) peak plasma concentration (more than three times higher) and shortened time to C(max) by 4h (p=0.014). The extent of absorption expressed by AUC was 85% larger as compared to the commercial tablet. Stability results, after 6 months storage of LDE tablets at 25 degrees C and 60% relative humidity, showed a slight increase in disintegration time and residual moisture content, while results from dissolution studies showed slightly slower initial drug release.