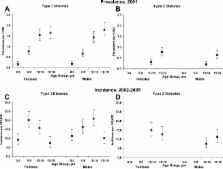 OBJECTIVE—To report the 2001 prevalence and 2002–2005 incidence of type 1 and type 2 diabetes in Hispanic American youth and to describe the demographic, clinical, and behavioral characteristics of these youth.

RESEARCH DESIGN AND METHODS—Data from the SEARCH for Diabetes in Youth Study, a population-based multicenter observational study of youth aged 0–19 years with physician-diagnosed diabetes, were used to estimate the prevalence and incidence of type 1 and type 2 diabetes. Information obtained by questionnaire, physical examination, and blood and urine collection was analyzed to describe the characteristics of youth who completed a study visit.

CONCLUSIONS—Factors such as poor glycemic control, elevated lipids, and a high prevalence of overweight and obesity may put Hispanic youth with type 1 and type 2 diabetes at risk for future diabetes-related complications.

Prevalence of overweight and obesity among US children, adolescents, and adults, 1999-2002.

Sustained effect of intensive treatment of type 1 diabetes mellitus on development and progression of diabetic nephropathy: the Epidemiology of Diabetes Interventions and Complications (EDIC) study.

(2003)
The Diabetes Control and Complications Trial (DCCT) demonstrated the benefits of intensive treatment of diabetes in reducing glycemic levels and slowing the progression of diabetic nephropathy. The DCCT cohort has been examined annually for another 8 years as part of the follow-up Epidemiology of Diabetes Interventions and Complications (EDIC) study. During the EDIC study, glycemic levels no longer differed substantially between the 2 original treatment groups. To determine the long-term effects of intensive vs conventional diabetes treatment during the DCCT on kidney function during the EDIC study. Observational study begun in 1993 (following DCCT closeout) in 28 medical centers in the United States and Canada. Participants were 1349 (of 1375) EDIC volunteers who had kidney evaluation at years 7 or 8. Development of microalbuminuria, clinical-grade albuminuria, hypertension, or increase in serum creatinine level. Results were analyzed by intention-to-treat analyses, comparing the 2 original DCCT treatment groups. New cases of microalbuminuria occurred during the EDIC study in 39 (6.8%) of the participants originally assigned to the intensive-treatment group vs 87 (15.8%) of those assigned to the conventional-treatment group, for a 59% (95% confidence interval [CI], 39%-73%) reduction in odds, adjusted for baseline values, compared with a 59% (95% CI, 36%-74%) reduction at the end of the DCCT (P<.001 for both comparisons). New cases of clinical albuminuria occurred in 9 (1.4%) of the participants in the original intensive-treatment group vs 59 (9.4%) of those in the original conventional-treatment group, representing an 84% reduction in odds (95% CI, 67%-92%), compared with a reduction of 57% (95% CI, -1% to +81%) at the end of the DCCT. Fewer cases of hypertension (prevalence at year 8, 29.9% vs 40.3%; P<.001) developed in the original intensive-treatment group. Significantly fewer participants reached a serum creatinine level of 2 mg/dL or greater in the intensive-treatment vs the conventional-treatment group (5 vs 19, P =.004), but there were no differences in mean log clearance values. Although small numbers of patients required dialysis and/or transplantation, fewer patients experienced either of these outcomes in the intensive group (4 vs 7, P =.36). The persistent beneficial effects on albumin excretion and the reduced incidence of hypertension 7 to 8 years after the end of the DCCT suggest that previous intensive treatment of diabetes with near-normal glycemia during the DCCT has an extended benefit in delaying progression of diabetic nephropathy.