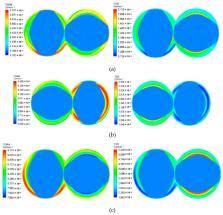 To better understand the relationship between flow, mixing and reactions in the process of preparing PP/TiO 2, a 3D numerical simulation in a co-rotating twin screw extruder (TSE) was firstly employed using commercial CFD code, ANSYS Polyflow. The effects of rotating speed of screws, stagger angle of knead blocks, inlet flow rate and initial temperature of barrel on the mixing and reaction process in the TSE were investigated. The results reveal that the studied operational and geometric parameters, which determine mixing efficiency, residence time distribution, and temperature of the flows in the TSE, affect the local species concentration, reaction time and reaction rate, and hence have great influences on the conversion rate. The results show that increasing the rotating speed and inlet flow rate can decrease the time for sufficient mixing, which is not conducive to intensive reaction, and increasing the stagger angle has the opposite effect. Moreover, the conversion rate greatly affected by the initial temperature of barrel.

M Malik,  D. M. Kalyon (corresponding) ,  J. Golba (2014)
Mathematical modeling and simulation of the coupled flow, deformation, heat and mass transfer, and rate of reactions occurring in the twin screw extruder allow the optimization of process parameters and the screw and barrel geometries. In mathematical modeling of the twin screw extrusion process the conventional flow boundary condition at the screw and barrel walls is the no-slip condition. However, most complex fluids, including polymers, polymeric suspensions and blends, exhibit wall slip, with the slip behavior depending on the intrinsic properties of the materials being processed, the operating conditions, the geometries of the barrel, screw and the die, and the properties of the solid surfaces. Typically, the slip velocity is specified to be a function of temperature, stress condition at the wall and the materials of construction. However, recent investigations have further revealed that the wall slip behavior can also be significantly affected by pressure. With an objective of considering the effects of wall slip on the dynamics of twin screw extrusion, fully-intermeshing co-rotating twin screw extrusion of a concentrated suspension is analyzed using three-dimensional finite element method, FEM, subject to the wall slip boundary condition. The wall slip boundary condition is first applied systematically to barrel and screw surfaces individually followed by the application of wall slip to both surfaces simultaneously. In an integrated fashion both the forward-conveying (pressure-generating) and reverse-conveying (pressure-losing) screw sections are considered. The effects of pressure on wall slip are also analyzed and elucidated.