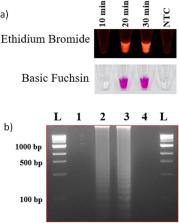 Rice blast (caused by Magnaporthe oryzae) and sheath rot diseases (caused by Sarocladium oryzae) are the most predominant seed-borne pathogens of rice. The detection of both pathogens in rice seed is essential to avoid production losses. In the present study, a microdevice platform was designed, which works on the principles of loop-mediated isothermal amplification (LAMP) to detect M. oryzae and S. oryzae in rice seeds. Initially, a LAMP, polymerase chain reaction (PCR), quantitative PCR (qPCR), and helicase dependent amplification (HDA) assays were developed with primers, specifically targeting M. oryzae and S. oryzae genome . The LAMP assay was highly efficient and could detect the presence of M. oryzae and S. oryzae genome at a concentration down to 100 fg within 20 min at 60 °C. Further, the sensitivity of the LAMP, HDA, PCR, and qPCR assays were compared wherein; the LAMP assay was highly sensitive up to 100 fg of template DNA. Using the optimized LAMP assay conditions, a portable foldable microdevice platform was developed to detect M. oryzae and S. oryzae in rice seeds. The foldable microdevice assay was similar to that of conventional LAMP assay with respect to its sensitivity (up to 100 fg), rapidity (30 min), and specificity. This platform could serve as a prototype for developing on-field diagnostic kits to be used at the point of care centers for the rapid diagnosis of M. oryzae and S. oryzae in rice seeds. This is the first study to report a LAMP-based foldable microdevice platform to detect any plant pathogens.

T. Notomi (2000)
We have developed a novel method, termed loop-mediated isothermal amplification (LAMP), that amplifies DNA with high specificity, efficiency and rapidity under isothermal conditions. This method employs a DNA polymerase and a set of four specially designed primers that recognize a total of six distinct sequences on the target DNA. An inner primer containing sequences of the sense and antisense strands of the target DNA initiates LAMP. The following strand displacement DNA synthesis primed by an outer primer releases a single-stranded DNA. This serves as template for DNA synthesis primed by the second inner and outer primers that hybridize to the other end of the target, which produces a stem-loop DNA structure. In subsequent LAMP cycling one inner primer hybridizes to the loop on the product and initiates displacement DNA synthesis, yielding the original stem-loop DNA and a new stem-loop DNA with a stem twice as long. The cycling reaction continues with accumulation of 10(9) copies of target in less than an hour. The final products are stem-loop DNAs with several inverted repeats of the target and cauliflower-like structures with multiple loops formed by annealing between alternately inverted repeats of the target in the same strand. Because LAMP recognizes the target by six distinct sequences initially and by four distinct sequences afterwards, it is expected to amplify the target sequence with high selectivity.

An overview of global rice production, supply, trade, and consumption.

Sumithra Muthayya,  Jonathan Sugimoto,  Scott Montgomery … (2014)
Rice is the staple food for over half the world's population. Approximately 480 million metric tons of milled rice is produced annually. China and India alone account for ∼50% of the rice grown and consumed. Rice provides up to 50% of the dietary caloric supply for millions living in poverty in Asia and is, therefore, critical for food security. It is becoming an important food staple in both Latin America and Africa. Record increases in rice production have been observed since the start of the Green Revolution. However, rice remains one of the most protected food commodities in world trade. Rice is a poor source of vitamins and minerals, and losses occur during the milling process. Populations that subsist on rice are at high risk of vitamin and mineral deficiency. Improved technologies to fortify rice have the potential to address these deficiencies and their associated adverse health effects. With the rice industry consolidating in many countries, there are opportunities to fortify a significant share of rice for distribution or for use in government safety net programs that target those most in need, especially women and children. Multisectoral approaches are needed for the promotion and implementation of rice fortification in countries.