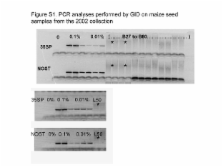 A possible consequence of planting genetically modified organisms (GMOs) in centres of crop origin is unintended gene flow into traditional landraces. In 2001, a study reported the presence of the transgenic 35S promoter in maize landraces sampled in 2000 from the Sierra Juarez of Oaxaca, Mexico. Analysis of a large sample taken from the same region in 2003 and 2004 could not confirm the existence of transgenes, thereby casting doubt on the earlier results. These two studies were based on different sampling and analytical procedures and are thus hard to compare. Here, we present new molecular data for this region that confirm the presence of transgenes in three of 23 localities sampled in 2001. Transgene sequences were not detected in samples taken in 2002 from nine localities, while directed samples taken in 2004 from two of the positive 2001 localities were again found to contain transgenic sequences. These findings suggest the persistence or re-introduction of transgenes up until 2004 in this area. We address variability in recombinant sequence detection by analyzing the consistency of current molecular assays. We also present theoretical results on the limitations of estimating the probability of transgene detection in samples taken from landraces. The inclusion of a limited number of female gametes and, more importantly, aggregated transgene distributions may significantly lower detection probabilities. Our analytical and sampling considerations help explain discrepancies among different detection efforts, including the one presented here, and provide considerations for the establishment of monitoring protocols to detect the presence of transgenes among structured populations of landraces.

The genetics of maize evolution.

John Doebley (2003)
Maize and its closest wild relatives, the teosintes, differ strikingly in the morphology of their female inflorescences or ears. Despite their divergent morphologies, several studies indicate that some varieties of teosinte are cytologically indistinguishable from maize and capable of forming fully fertile hybrids with maize. Molecular analyses identified one form of teosinte (Zea mays ssp. parviglumis) as the progenitor of maize. Analyses of the inheritance of the morphological traits that distinguish maize and teosinte indicates that they are under the control of multiple genes and exhibit quantitative inheritance. Nevertheless, these analyses have also identified a few loci of large effect that appear to represent key innovations during maize domestication. Remaining challenges are to identify additional major and minor effect genes, the polymorphisms within these genes that control the phenotypes, and how the combination of the individual and epistatic effects of these genes transformed teosinte into maize.

David Quist,  Ignacio H Chapela (2001)
Concerns have been raised about the potential effects of transgenic introductions on the genetic diversity of crop landraces and wild relatives in areas of crop origin and diversification, as this diversity is considered essential for global food security. Direct effects on non-target species, and the possibility of unintentionally transferring traits of ecological relevance onto landraces and wild relatives have also been sources of concern. The degree of genetic connectivity between industrial crops and their progenitors in landraces and wild relatives is a principal determinant of the evolutionary history of crops and agroecosystems throughout the world. Recent introductions of transgenic DNA constructs into agricultural fields provide unique markers to measure such connectivity. For these reasons, the detection of transgenic DNA in crop landraces is of critical importance. Here we report the presence of introgressed transgenic DNA constructs in native maize landraces grown in remote mountains in Oaxaca, Mexico, part of the Mesoamerican centre of origin and diversification of this crop.

Do escaped transgenes persist in nature? The case of an herbicide resistance transgene in a weedy Brassica rapa population.

S. Warwick,  A Légère,  M-J Simard … (2008)
The existence of transgenic hybrids resulting from transgene escape from genetically modified (GM) crops to wild or weedy relatives is well documented but the fate of the transgene over time in recipient wild species populations is still relatively unknown. This is the first report of the persistence and apparent introgression, i.e. stable incorporation of genes from one differentiated gene pool into another, of an herbicide resistance transgene from Brassica napus into the gene pool of its weedy relative, Brassica rapa, monitored under natural commercial field conditions. Hybridization between glyphosate-resistant [herbicide resistance (HR)]B. napus and B. rapa was first observed at two Québec sites, Ste Agathe and St Henri, in 2001. B. rapa populations at these two locations were monitored in 2002, 2003 and 2005 for the presence of hybrids and transgene persistence. Hybrid numbers decreased over the 3-year period, from 85 out of approximately 200 plants surveyed in 2002 to only five out of 200 plants in 2005 (St Henri site). Most hybrids had the HR trait, reduced male fertility, intermediate genome structure, and presence of both species-specific amplified fragment length polymorphism markers. Both F(1) and backcross hybrid generations were detected. One introgressed individual, i.e. with the HR trait and diploid ploidy level of B. rapa, was observed in 2005. The latter had reduced pollen viability but produced approximately 480 seeds. Forty-eight of the 50 progeny grown from this plant were diploid with high pollen viability and 22 had the transgene (1:1 segregation). These observations confirm the persistence of the HR trait over time. Persistence occurred over a 6-year period, in the absence of herbicide selection pressure (with the exception of possible exposure to glyphosate in 2002), and in spite of the fitness cost associated with hybridization.

(A. Piñeyro-Nelson, J. van Heerwaarden) These authors contributed equally to this work.