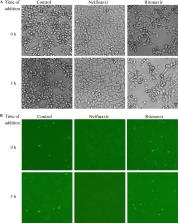 A novel coronavirus has been identified as an etiological agent of severe acute respiratory syndrome (SARS). To rapidly identify anti-SARS drugs available for clinical use, we screened a set of compounds that included antiviral drugs already in wide use. Here we report that the HIV-1 protease inhibitor, nelfinavir, strongly inhibited replication of the SARS coronavirus (SARS-CoV). Nelfinavir inhibited the cytopathic effect induced by SARS-CoV infection. Expression of viral antigens was much lower in infected cells treated with nelfinavir than in untreated infected cells. Quantitative RT-PCR analysis showed that nelfinavir could decrease the production of virions from Vero cells. Experiments with various timings of drug addition revealed that nelfinavir exerted its effect not at the entry step, but at the post-entry step of SARS-CoV infection. Our results suggest that nelfinavir should be examined clinically for the treatment of SARS and has potential as a good lead compound for designing anti-SARS drugs.

Christl Donnelly,  Azra C. Ghani,  Gabriel Leung … (2003)
Summary Background Health authorities worldwide, especially in the Asia Pacific region, are seeking effective public-health interventions in the continuing epidemic of severe acute respiratory syndrome (SARS). We assessed the epidemiology of SARS in Hong Kong. Methods We included 1425 cases reported up to April 28, 2003. An integrated database was constructed from several sources containing information on epidemiological, demographic, and clinical variables. We estimated the key epidemiological distributions: infection to onset, onset to admission, admission to death, and admission to discharge. We measured associations between the estimated case fatality rate and patients’age and the time from onset to admission. Findings After the initial phase of exponential growth, the rate of confirmed cases fell to less than 20 per day by April 28. Public-health interventions included encouragement to report to hospital rapidly after the onset of clinical symptoms, contact tracing for confirmed and suspected cases, and quarantining, monitoring, and restricting the travel of contacts. The mean incubation period of the disease is estimated to be 6.4 days (95% Cl 5.2–7.7). The mean time from onset of clinical symptoms to admission to hospital varied between 3 and 5 days, with longer times earlier in the epidemic. The estimated case fatality rate was 13.2% (9.8–16.8) for patients younger than 60 years and 43.3% (35.2–52.4) for patients aged 60 years or older assuming a parametric γ distribution. A non-parametric method yielded estimates of 6.8% (4.0–9.6) and 55.0% (45.3–64.7), respectively. Case clusters have played an important part in the course of the epidemic. Interpretation Patients’age was strongly associated with outcome. The time between onset of symptoms and admission to hospital did not alter outcome, but shorter intervals will be important to the wider population by restricting the infectious period before patients are placed in quarantine. Published online May 7, 2003 http://image.thelancet.com/extras/03art4453web.pdf

KLE Hon,  CW Leung,  WTF Cheng … (2003)
Summary Hong Kong has been severely affected by severe acute respiratory syndrome (SARS). Contact in households and healthcare settings is thought to be important for transmission, putting children at particular risk. Most data so far, however, have been for adults. We prospectively followed up the first ten children with SARS managed during the early phase of the epidemic in Hong Kong. All the children had been in close contact with infected adults. Persistent fever, cough, progressive radiographic changes of chest and lymphopenia were noted in all patients. The children were treated with high-dose ribavirin, oral prednisolone, or intravenous methylprednisolone, with no short-term adverse effects. Four teenagers required oxygen therapy and two needed assisted ventilation. None of the younger children required oxygen supplementation. Compared with adults and teenagers, SARS seems to have a less aggressive clinical course in younger children.

Loletta So,  Arthur Lau,  Loretta YC Yam … (2003)
Summary A series of 31 patients with probable SARS, diagnosed from WHO criteria, were treated according to a treatment protocol consisting of antibacterials and a combination of ribavirin and methylprednisolone. Through experience with the first 11 patients, we were able to finalise standard dose regimens, including pulsed methylprednisolone. One patient recovered on antibacterial treatment alone, 17 showed rapid and sustained responses, and 13 achieved improvement with step-up or pulsed methylprednisolone. Four patients required short periods of non-invasive ventilation. No patient required intubation or mechanical ventilation. There was no mortality or treatment morbidity in this series.