An inhibitor of ubiquitin conjugation and aggresome formation† 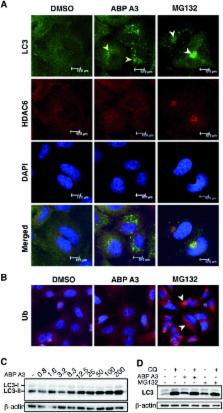 CHOP is implicated in programmed cell death in response to impaired function of the endoplasmic reticulum.

N Batchvarova,  H Zinszner,  R Lightfoot … (1998)
Cellular stress, particularly in response to toxic and metabolic insults that perturb function of the endoplasmic reticulum (ER stress), is a powerful inducer of the transcription factor CHOP. The role of CHOP in the response of cells to injury associated with ER stress was examined in a murine deficiency model obtained by homologous recombination at the chop gene. Compared with the wild type, mouse embryonic fibroblasts (MEFs) derived from chop -/- animals exhibited significantly less programmed cell death when challenged with agents that perturb ER function. A similar deficit in programmed cells death in response to ER stress was also observed in MEFs that lack CHOP's major dimerization partner, C/EBPbeta, implicating the CHOP-C/EBP pathway in programmed cell death. An animal model for studying the effects of chop on the response to ER stress was developed. It entailed exposing mice with defined chop genotypes to a single sublethal intraperitoneal injection of tunicamycin and resulted in a severe illness characterized by transient renal insufficiency. In chop +/+ and chop +/- mice this was associated with the early expression of CHOP in the proximal tubules followed by the development of a histological picture similar to the human condition known as acute tubular necrosis, a process that resolved by cellular regeneration. In the chop -/- animals, in spite of the severe impairment in renal function, evidence of cellular death in the kidney was reduced compared with the wild type. The proximal tubule epithelium of chop -/- animals exhibited fourfold lower levels of TUNEL-positive cells (a marker for programmed cell death), and significantly less evidence for subsequent regeneration. CHOP therefore has a role in the induction of cell death under conditions associated with malfunction of the ER and may also have a role in cellular regeneration under such circumstances.

Jennifer A. Johnston,  Cristina Ward,  Ron Kopito (1998)
Intracellular deposition of misfolded protein aggregates into ubiquitin-rich cytoplasmic inclusions is linked to the pathogenesis of many diseases. Why these aggregates form despite the existence of cellular machinery to recognize and degrade misfolded protein and how they are delivered to cytoplasmic inclusions are not known. We have investigated the intracellular fate of cystic fibrosis transmembrane conductance regulator (CFTR), an inefficiently folded integral membrane protein which is degraded by the cytoplasmic ubiquitin-proteasome pathway. Overexpression or inhibition of proteasome activity in transfected human embryonic kidney or Chinese hamster ovary cells led to the accumulation of stable, high molecular weight, detergent-insoluble, multiubiquitinated forms of CFTR. Using immunofluorescence and transmission electron microscopy with immunogold labeling, we demonstrate that undegraded CFTR molecules accumulate at a distinct pericentriolar structure which we have termed the aggresome. Aggresome formation is accompanied by redistribution of the intermediate filament protein vimentin to form a cage surrounding a pericentriolar core of aggregated, ubiquitinated protein. Disruption of microtubules blocks the formation of aggresomes. Similarly, inhibition of proteasome function also prevented the degradation of unassembled presenilin-1 molecules leading to their aggregation and deposition in aggresomes. These data lead us to propose that aggresome formation is a general response of cells which occurs when the capacity of the proteasome is exceeded by the production of aggregation-prone misfolded proteins.

A phase 2 study of bortezomib in relapsed, refractory myeloma.

K. Anderson,  Michael Kauffman,  S Limentani … (2003)
Bortezomib, a boronic acid dipeptide, is a novel proteasome inhibitor that has been shown in preclinical and phase 1 studies to have antimyeloma activity. In this multicenter, open-label, nonrandomized, phase 2 trial, we enrolled 202 patients with relapsed myeloma that was refractory to the therapy they had received most recently. Patients received 1.3 mg of bortezomib per square meter of body-surface area twice weekly for 2 weeks, followed by 1 week without treatment, for up to eight cycles (24 weeks). In patients with a suboptimal response, oral dexamethasone (20 mg daily, on the day of and the day after bortezomib administration) was added to the regimen. The response was evaluated according to the criteria of the European Group for Blood and Marrow Transplantation and confirmed by an independent review committee. Of 193 patients who could be evaluated, 92 percent had been treated with three or more of the major classes of agents for myeloma, and in 91 percent, the myeloma was refractory to the therapy received most recently. The rate of response to bortezomib was 35 percent, and those with a response included 7 patients in whom myeloma protein became undetectable and 12 in whom myeloma protein was detectable only by immunofixation. The median overall survival was 16 months, with a median duration of response of 12 months. Grade 3 adverse events included thrombocytopenia (in 28 percent of patients), fatigue (in 12 percent), peripheral neuropathy (in 12 percent), and neutropenia (in 11 percent). Grade 4 events occurred in 14 percent of patients. Bortezomib, a member of a new class of anticancer drugs, is active in patients with relapsed multiple myeloma that is refractory to conventional chemotherapy. Copyright 2003 Massachusetts Medical Society

This is an Open Access article distributed under the terms of the Creative Commons Attribution 3.0 Unported License ( http://creativecommons.org/licenses/by/3.0/) which permits unrestricted use, distribution, and reproduction in any medium, provided the original work is properly cited.