The One Hour Yeast Proteome* 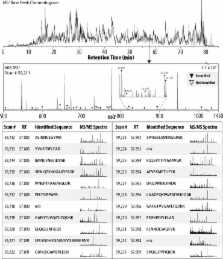 We describe the comprehensive analysis of the yeast proteome in just over one hour of optimized analysis. We achieve this expedited proteome characterization with improved sample preparation, chromatographic separations, and by using a new Orbitrap hybrid mass spectrometer equipped with a mass filter, a collision cell, a high-field Orbitrap analyzer, and, finally, a dual cell linear ion trap analyzer (Q-OT-qIT, Orbitrap Fusion). This system offers high MS 2 acquisition speed of 20 Hz and detects up to 19 peptide sequences within a single second of operation. Over a 1.3 h chromatographic method, the Q-OT-qIT hybrid collected an average of 13,447 MS 1 and 80,460 MS 2 scans (per run) to produce 43,400 (x̄) peptide spectral matches and 34,255 (x̄) peptides with unique amino acid sequences (1% false discovery rate (FDR)). On average, each one hour analysis achieved detection of 3,977 proteins (1% FDR). We conclude that further improvements in mass spectrometer scan rate could render comprehensive analysis of the human proteome within a few hours.

Tessa Davis,  John P. Brown,  M Schena … (1995)
A high-capacity system was developed to monitor the expression of many genes in parallel. Microarrays prepared by high-speed robotic printing of complementary DNAs on glass were used for quantitative expression measurements of the corresponding genes. Because of the small format and high density of the arrays, hybridization volumes of 2 microliters could be used that enabled detection of rare transcripts in probe mixtures derived from 2 micrograms of total cellular messenger RNA. Differential expression measurements of 45 Arabidopsis genes were made by means of simultaneous, two-color fluorescence hybridization.

Correlation between protein and mRNA abundance in yeast.

S Gygi,  B. Robert Franza,  Y Rochon … (1999)
We have determined the relationship between mRNA and protein expression levels for selected genes expressed in the yeast Saccharomyces cerevisiae growing at mid-log phase. The proteins contained in total yeast cell lysate were separated by high-resolution two-dimensional (2D) gel electrophoresis. Over 150 protein spots were excised and identified by capillary liquid chromatography-tandem mass spectrometry (LC-MS/MS). Protein spots were quantified by metabolic labeling and scintillation counting. Corresponding mRNA levels were calculated from serial analysis of gene expression (SAGE) frequency tables (V. E. Velculescu, L. Zhang, W. Zhou, J. Vogelstein, M. A. Basrai, D. E. Bassett, Jr., P. Hieter, B. Vogelstein, and K. W. Kinzler, Cell 88:243-251, 1997). We found that the correlation between mRNA and protein levels was insufficient to predict protein expression levels from quantitative mRNA data. Indeed, for some genes, while the mRNA levels were of the same value the protein levels varied by more than 20-fold. Conversely, invariant steady-state levels of certain proteins were observed with respective mRNA transcript levels that varied by as much as 30-fold. Another interesting observation is that codon bias is not a predictor of either protein or mRNA levels. Our results clearly delineate the technical boundaries of current approaches for quantitative analysis of protein expression and reveal that simple deduction from mRNA transcript analysis is insufficient.

Exploring the metabolic and genetic control of gene expression on a genomic scale.

Peter de Nully Brown,  J DeRisi,  Srinivasan Iyer … (1997)
DNA microarrays containing virtually every gene of Saccharomyces cerevisiae were used to carry out a comprehensive investigation of the temporal program of gene expression accompanying the metabolic shift from fermentation to respiration. The expression profiles observed for genes with known metabolic functions pointed to features of the metabolic reprogramming that occur during the diauxic shift, and the expression patterns of many previously uncharacterized genes provided clues to their possible functions. The same DNA microarrays were also used to identify genes whose expression was affected by deletion of the transcriptional co-repressor TUP1 or overexpression of the transcriptional activator YAP1. These results demonstrate the feasibility and utility of this approach to genomewide exploration of gene expression patterns.

From the ‡Departments of Biomolecular Chemistry;
§The Genome Center of Wisconsin, and
¶Chemistry, 425 Henry Mall, University of Wisconsin, Madison, Wisconsin 53706

** These authors contributed equally to this work.