A taxonomic revision of the whitefish of lakes Brienz and Thun, Switzerland, with descriptions of four new species (Teleostei, Coregonidae) 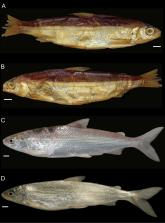 The alpha taxonomy of the endemic whitefish of lakes Brienz and Thun, Switzerland, is revised. We evaluate the status of seven known species: Coregonus steinmanni sp. nov., Coregonus profundus sp. nov. and Coregonus acrinasus sp. nov. are endemic to Lake Thun; Coregonus Brienzii sp. nov. is endemic to Lake Brienz; and C. alpinus , C. albellus , and C. fatioi from lakes Brienz and Thun are redescribed. One of these species, C. alpinus , is revised, since the lectotype for this species is incongruent with the species description given by Kottelat (1997) and Kottelat and Freyhof (2007). The name C. alpinus is thus retained for the lectotype designated by Kottelat (1997) and a new description of this taxon provided. For the species otherwise described by Kottelat (1997) and Kottelat and Freyhof (2007) as C. alpinus the new name C. profundus is designated. Coregonus acrinasus is genetically partially of allochthonous origin, closely related to the radiation of Lake Constance, and we therefore compare it to all recognized species of Lake Constance, C. wartmanni , C. macrophthalmus , C. arenicolus , and C. gutturosus .

J. Pritchard,  M. Stephens,  P. Donnelly … (2000)
We describe a model-based clustering method for using multilocus genotype data to infer population structure and assign individuals to populations. We assume a model in which there are K populations (where K may be unknown), each of which is characterized by a set of allele frequencies at each locus. Individuals in the sample are assigned (probabilistically) to populations, or jointly to two or more populations if their genotypes indicate that they are admixed. Our model does not assume a particular mutation process, and it can be applied to most of the commonly used genetic markers, provided that they are not closely linked. Applications of our method include demonstrating the presence of population structure, assigning individuals to populations, studying hybrid zones, and identifying migrants and admixed individuals. We show that the method can produce highly accurate assignments using modest numbers of loci-e.g. , seven microsatellite loci in an example using genotype data from an endangered bird species. The software used for this article is available from http://www.stats.ox.ac.uk/ approximately pritch/home. html.

CLUMPP: a cluster matching and permutation program for dealing with label switching and multimodality in analysis of population structure.

M Jakobsson,  N. Rosenberg (2007)
Clustering of individuals into populations on the basis of multilocus genotypes is informative in a variety of settings. In population-genetic clustering algorithms, such as BAPS, STRUCTURE and TESS, individual multilocus genotypes are partitioned over a set of clusters, often using unsupervised approaches that involve stochastic simulation. As a result, replicate cluster analyses of the same data may produce several distinct solutions for estimated cluster membership coefficients, even though the same initial conditions were used. Major differences among clustering solutions have two main sources: (1) 'label switching' of clusters across replicates, caused by the arbitrary way in which clusters in an unsupervised analysis are labeled, and (2) 'genuine multimodality,' truly distinct solutions across replicates. To facilitate the interpretation of population-genetic clustering results, we describe three algorithms for aligning multiple replicate analyses of the same data set. We have implemented these algorithms in the computer program CLUMPP (CLUster Matching and Permutation Program). We illustrate the use of CLUMPP by aligning the cluster membership coefficients from 100 replicate cluster analyses of 600 chickens from 20 different breeds. CLUMPP is freely available at http://rosenberglab.bioinformatics.med.umich.edu/clumpp.html.

P Vonlanthen,  R Müller,  S. Piazza … (2012)
Species diversity can be lost through two different but potentially interacting extinction processes: demographic decline and speciation reversal through introgressive hybridization. To investigate the relative contribution of these processes, we analysed historical and contemporary data of replicate whitefish radiations from 17 pre-alpine European lakes and reconstructed changes in genetic species differentiation through time using historical samples. Here we provide evidence that species diversity evolved in response to ecological opportunity, and that eutrophication, by diminishing this opportunity, has driven extinctions through speciation reversal and demographic decline. Across the radiations, the magnitude of eutrophication explains the pattern of species loss and levels of genetic and functional distinctiveness among remaining species. We argue that extinction by speciation reversal may be more widespread than currently appreciated. Preventing such extinctions will require that conservation efforts not only target existing species but identify and protect the ecological and evolutionary processes that generate and maintain species.